The Nine Deserts of Africa

everything you need to know about Africa’s deserts

Over one-third of the African continent is covered by desert, from the Mediterranean to South Africa and the Indian to the Atlantic oceans. The deserts of Africa are home to some of the most extreme landscapes and stark conditions on Earth, as well as some of the most beautiful. Whilst there is seemingly plenty of nothing in African deserts, they offer a unique environmental and cultural history dating back millions of years, and in places are home to excellent wildlife viewing opportunities.

What is a desert?

Deserts are defined as dry regions receiving less than 12 inches of precipitation annually, and are formed when regional climate changes result in long-lasting drought conditions.

In Africa, the deserts are also characterised by warm to very hot daytime temperatures with cooler nights.

With this definition in mind, it’s generally accepted that there are nine unique deserts in Africa, though some of the larger deserts are sometimes split into regions, leading to more desert names. The list below of the nine  deserts of Africa are in descending size order:

The Sahara is Africa’s largest desert and the world’s largest hot desert, stretching across 12 countries and covering most of North Africa.

The Sahara’s borders are the Atlas Mountains and the Mediterranean Sea to the north, the Red Sea to the east, the Atlantic Ocean to the west, and the transitional Sahel region to the south. The Sahara is not one huge, uniform desert, but is made up of many regions, each with their own rainfall levels, temperatures, plants, and wildlife. As such the Sahara is made up of varied terrain, including sand dunes, volcanic mountains, plains, stony plateaus, and, crucially, oases, which allowed trading routes to develop between North African ports and populations in sub-Saharan Africa.

Whilst must of the Sahara is barren, the desert supports a mix of wildlife including oryx, gazelles, deer, wild asses, baboons, hyenas, jackals, sand foxes, and mongooses. 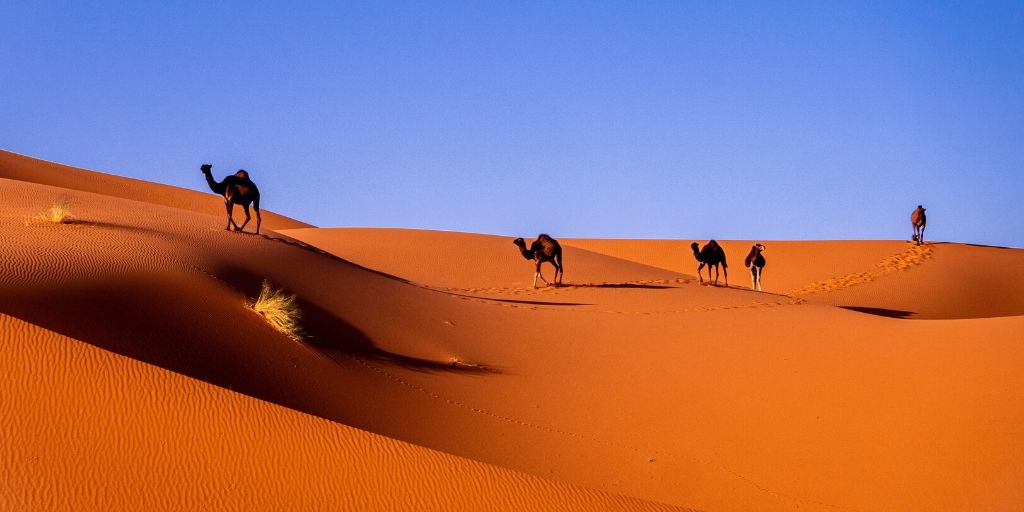 A camel caravan makes its way over the Saharan dunes

The semi-arid Kalahari Desert lies in the heart of southern Africa, covering much of Botswana, and parts of Namibia and South Africa. Some academics maintain that because parts of the Kalahari receive more than 10 inches of rain annually it’s not a true desert. It is this annual precipitation of 4 to 20 inches that allows the desert to support vegetation such as resilient grasses, thorny shrubs, and acacia trees.

Unique features of the Kalahari Desert are the prominent sand dunes and huge salt pans left behind by long ago dried up lakes. The Okavango River runs through the Kalahari, and other non-permanent water sources appear during the rainy season. Because of this access to water, the Kalahari is home to lions, brown hyenas, meerkats, antelopes, and a wide variety of birds and reptiles.

A gazelle strolls through a sandstorm in the Kalahari Desert.

The Karoo is a semi-desert natural region of South Africa defined by its topography, geology, and climate – particularly its low rainfall of up to 10 inches annually and its extremes of heat and cold.

The Karoo is divided into two distinct regions – the Succulent Karoo Biome to the west, and the Nama Karoo Biome which covers much of South Africa’s southern interior plateau. The Succulent Karoo has the world’s richest flora of succulent plants, with an estimated 10,000 succulent species. Underground water is found across the Karoo, which has been tapped over the decades by settlers and allows Nama Karoo to be used for grazing by sheep and goats. 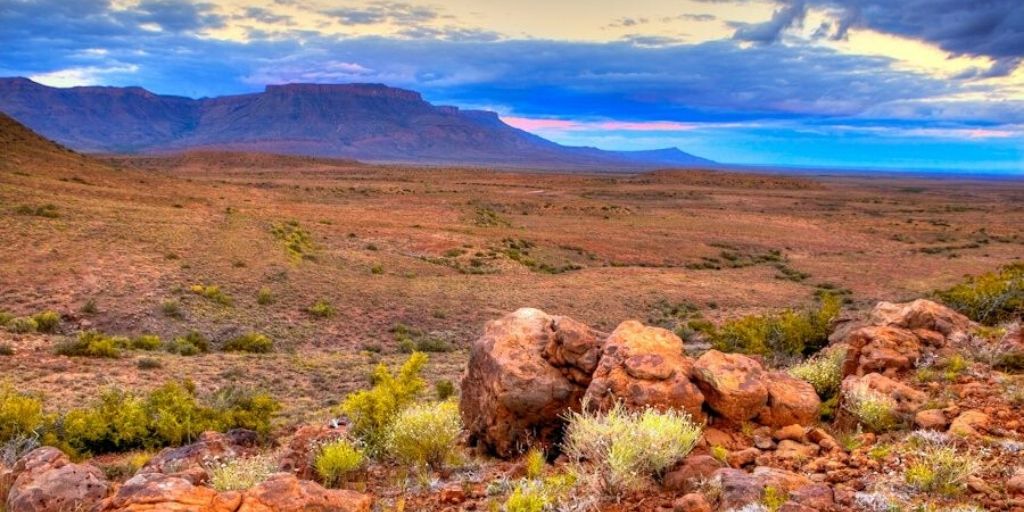 The Danakil Desert is situated in the Afar Triangle, stretching across northeastern Ethiopia and the coast of southern Eritrea and northwestern Djibouti. The desert is one of the most extreme environments in the whole of Africa with lava lakes, volcanoes, hot springs, geysers, and some impressive multi-coloured salt lakes.

Less than one inch of rainfall is recorded each year, and the Danakil Desert is both one of the lowest and hottest places on earth, reaching soaring temperatures of up to 50°C/122°F. 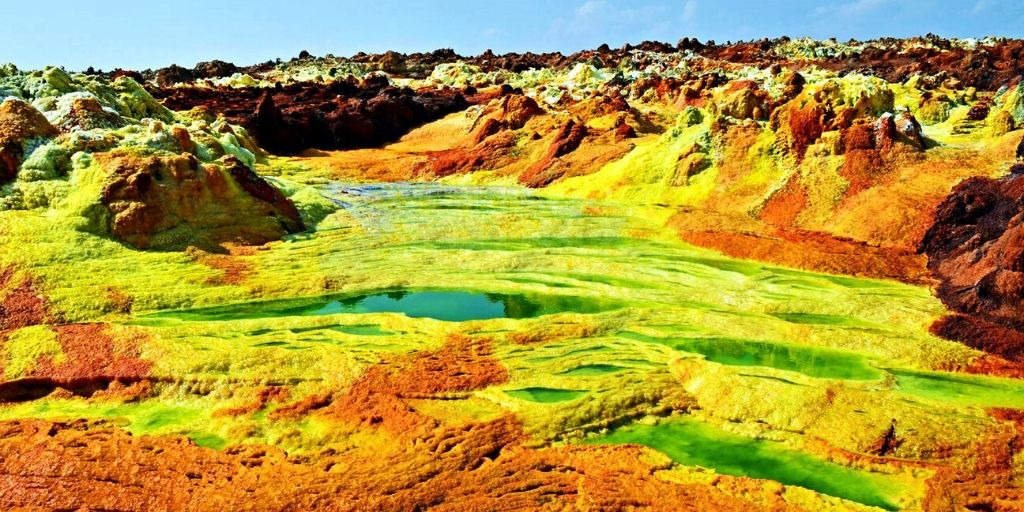 Located to the east of Kenya’s Lake Turkana, the Chalbi desert is one of the hottest and most arid places in Kenya. The name comes from the Gabbra dialect for ‘bare and salty’, which seems particularly appropriate given this vast bleached stretch of earth is an old river bed dotted with rocks and huge dried clay formations. 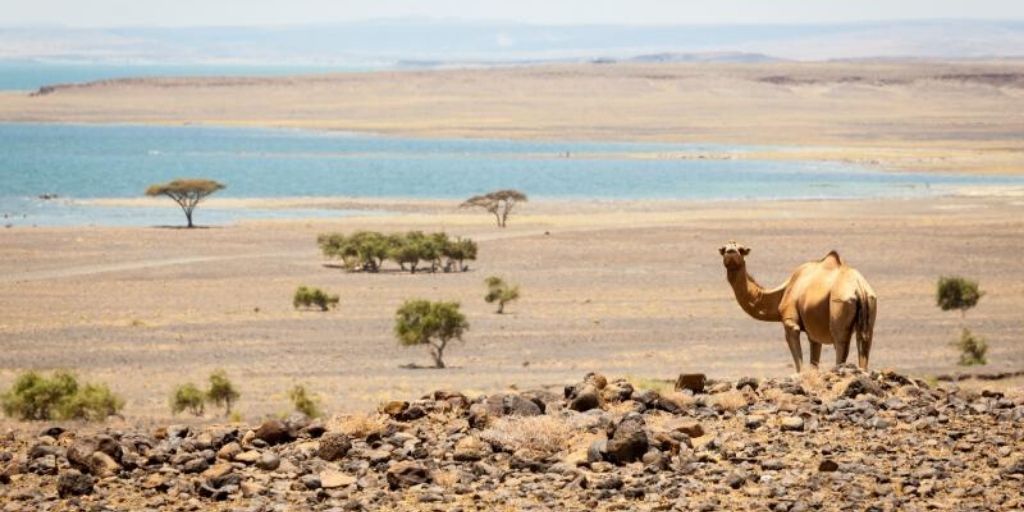 A camel takes in the views of Lake Turkana in the Chalbi Desert, Kenya

The Namib desert has some of the highest dunes on the planet at over 300 meters and is thought to be the world’s oldest desert at around 80 million years old. Stretching along the Atlantic coastal region of Southern Africa the desert covers parts of Angola, Namibia, and South Africa, and merges with the Kalahari Desert in the south.

The climate is extremely arid due to interactions between the dry Namib winds and the Atlantic’s Benguela current. It’s these forces that form dense fogs which provide the main water source for many of the desert’s plants and animals. The desert is home to Namibia’s largest conservation area – the epic Namib-Naukluft Park. 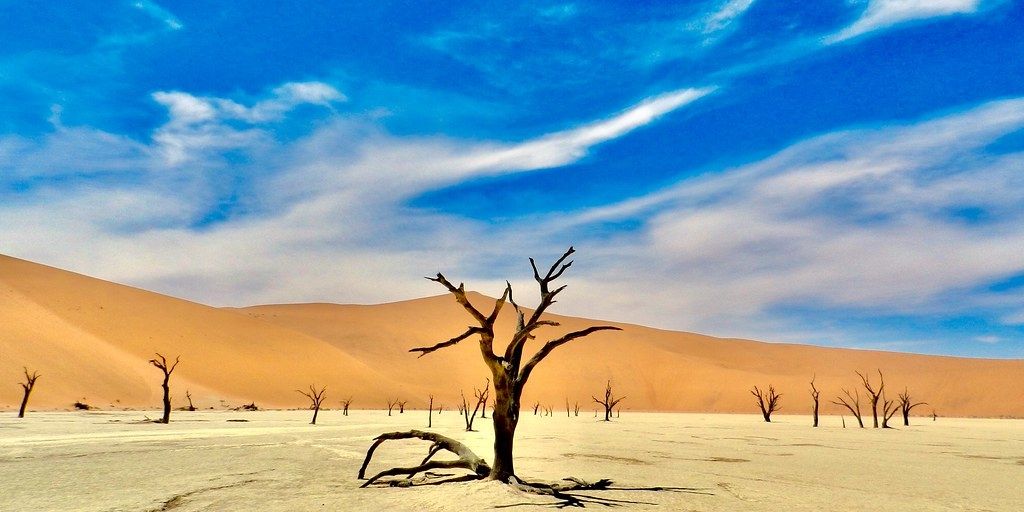 The Guban Desert refers to the narrow ‘burnt land’ which runs to the easternmost tip of the northern Somalian coast, between the cities of Zeila and Berbera.​ The hot, dry plain on the Gulf of Aden coast has a system of sandy seasonal watercourses, and sparse steppe vegetation. 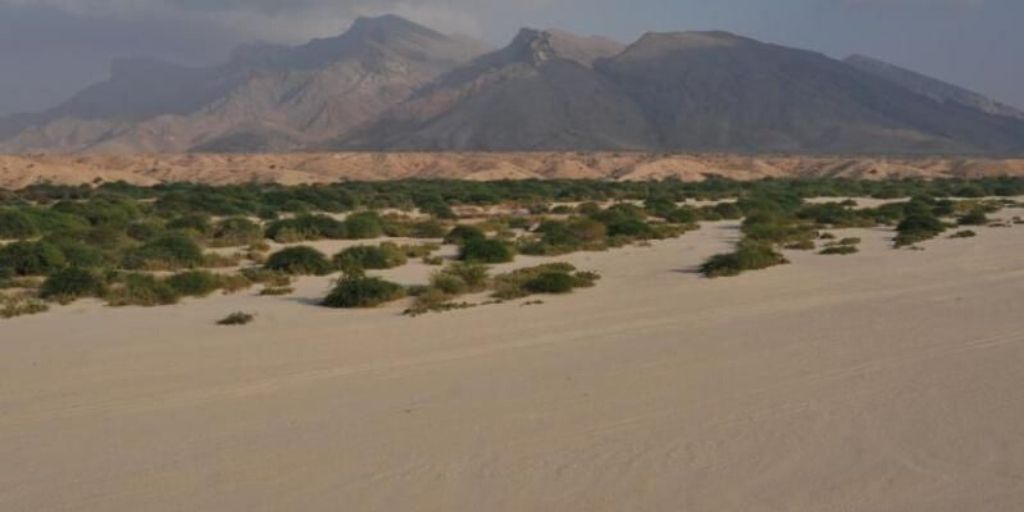 The Nyiri Desert, also known as the Nyika or Taru Desert, lies in southern Kenya between Amboseli, Tsavo West, and Nairobi National Parks.

The desert is in the rainshadow region of Mount Kilimanjaro, contributing to the extremely low levels of rainfall. However, there are several large springs that support large mammals including elephant, giraffe, rhinoceros, lion, leopard, and kudu, and provide water for growths of small, thorny trees and some baobabs. 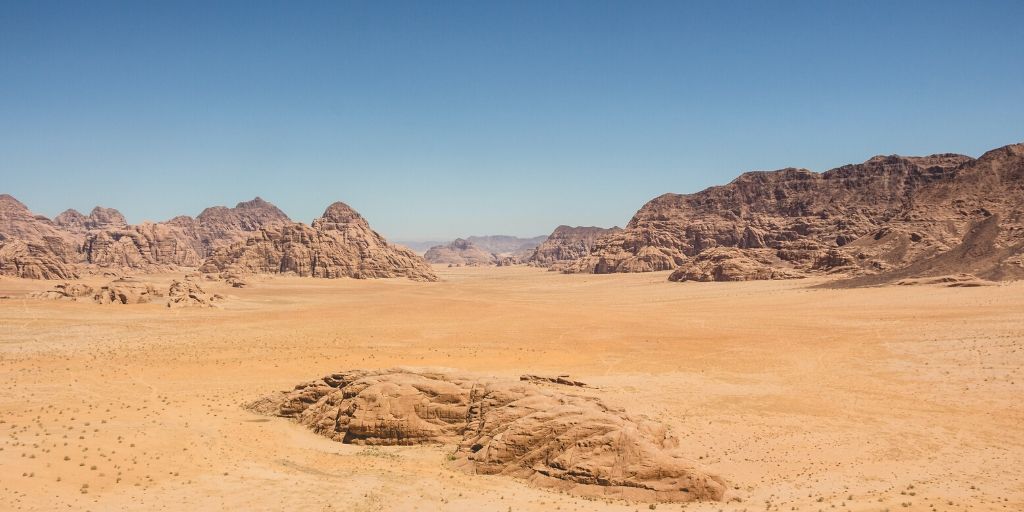 Views of the distant rocks in Kenya’s Nyiri Desert.

The Grand Bara Desert in southern Djibouti is a dried-up lake bed, now made up of large sand flats interspersed with sparse desert grasses and shrubs. The desert is flat and infertile, with no bushes or trees, despite which several large species of mammals have adapted to live in the region, including dik-dik and oryx. The desert also plays host to the grueling annual 15 km Foreign Legion run. 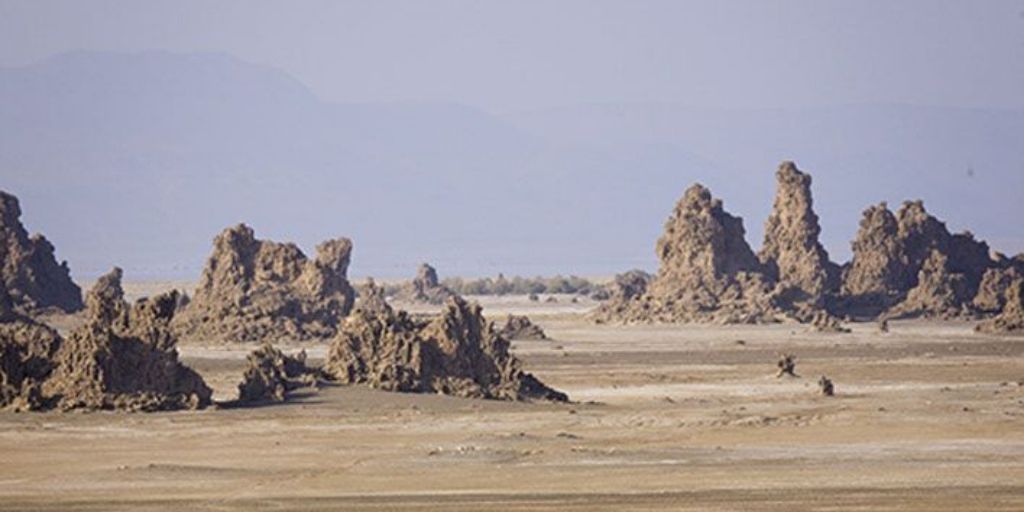 The Lompoul desert is Africa’s smallest desert, lying in northwestern Senegal between Dakar and Saint-Louis. Easy access makes the desert a popular tourist destination with visitors there to admire the surrounding large orange sand dunes, reminiscent of the Sahara or Namib deserts. 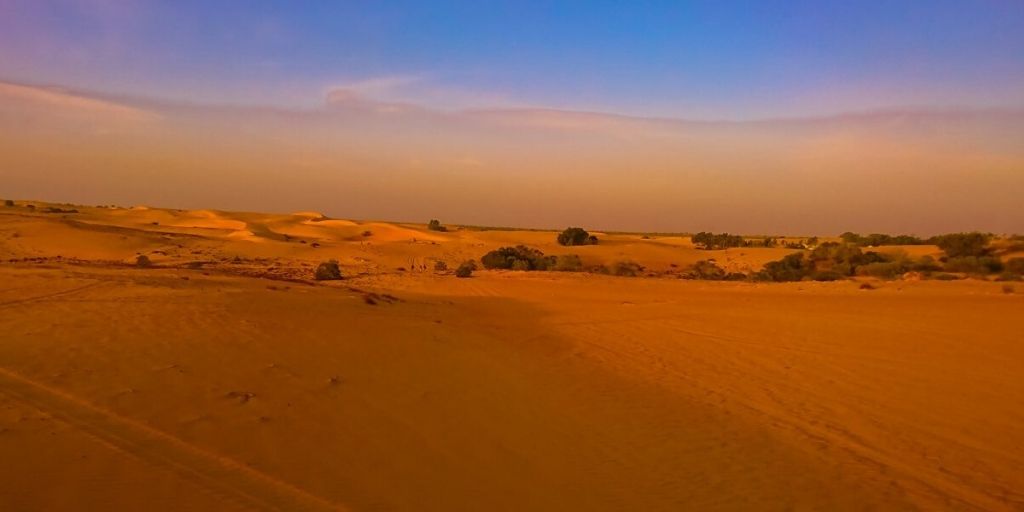 Sunset in the Lompoul Desert

And that’s our take on the deserts of Africa. What are your thoughts – any information we’re missing? Let us know in the comments section below.

What Are The Most Dangerous Animals In Africa?