the greatest show on earth

The Great Migration through Tanzania and Kenya each year is the largest overland wildlife migration in the world. Huge herds totalling up to 2 million wildebeest, zebra and gazelle move in an 800 km circuit clockwise through the Serengeti and Maasai Mara ecosystem in search of the best pastures and access to water. These grazers are followed by lions and other predators in their thousands, and waited for patiently by crocodiles in the Mara and Grometi Rivers as the herd follow their inner compass – and each other – in their never-ending circular journey.

And this whole animal migration is in turn followed by safari connoisseurs, wanting to witness some of the very best wildlife action nature has to offer anywhere in the world.

This article gives you all the info you need to know before you go, and will help you plan your time watching the great migration. Bear in mind though that this great event is a natural phenomenon, and as such exact timings and locations are unpredictable.

Why does the migration happen?

The Great Wildebeest Migration by season

Map of the migration

Top tops for witnessing the migration

The Serengeti-Maasai Mara ecosystem is a region of Eastern African equatorial savannah, situated in northern Tanzania and south-western Kenya and totalling approximately 30,00 km sq. The area comprises the adjoining Serengeti National Park in Tanzania, and Masai Mara National Reserve in Kenya, along with a number of bordering Tanzanian conservation areas and game reserves including the Maswa Game Reserve,  the Loliondo Game Controlled Area, the Grumeti Reserve and the Ngorongoro Conservation Area. In addition, a number of private conservancies have been established in recent decades which border the unfenced national parks and reserves and are rewilding areas previously used as grazing land for Maasai cattle.

You can see the Great Migration in Tanzania year round, whilst the best months to see action in Kenya tend to be September and October. As the migration is in a circular motion around the Serengeti/Maasai ecosystem it’s essentially an ongoing event. It’s also an event that is primarily driven by the weather – more specifically, rainfall. This means that while tracking the herds is not an exact science, the overall migration runs through the same general pattern each year. Below we run through where the herds are usually found in each month:

The rain-plump grasses in the deep south of the Serengeti feed the huge milling herds, not only of wildebeest but hundreds of thousands gazelle, zebra and other antelopes. The first rains on these plains see the herds congregating around the Ndutu part of the Ngorongoro Conservation Area, with best sightings around Lobo and Naabi Hills. Females are heavily pregnant and this is the start of calving season 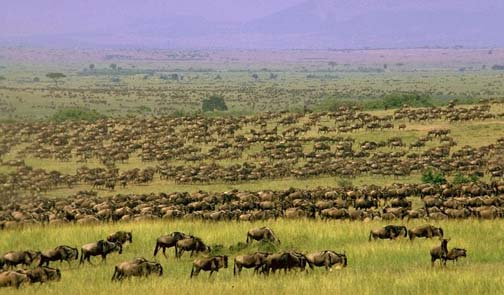 Best places to stay: Ndutu Lodge and Kusini are the only permanent lodges in the area, whilst there’s plenty of accommodation around the Ngorongoro crater rim that will mean a long drive to see the herds. Huge herd of wildebeest congregating in Ndutu

The dense herds graze around Lakes Maek and Ndutu as the females give birth to their young, with hundreds of thousands of wildebeest born through this peak birthing month at rates of up to 8,000 per day. After calves are born the herds stays put in southeast Ndutu, leaving wildebeest herds as far as the eye can see, triggering the many predators into action to get their fill.

The herds finish their calving as the short-grass plains of the southernmost Serengeti begin to dry out. They begin to move west towards the woodlands with babies in tow, where the short afternoon rains are beginning. 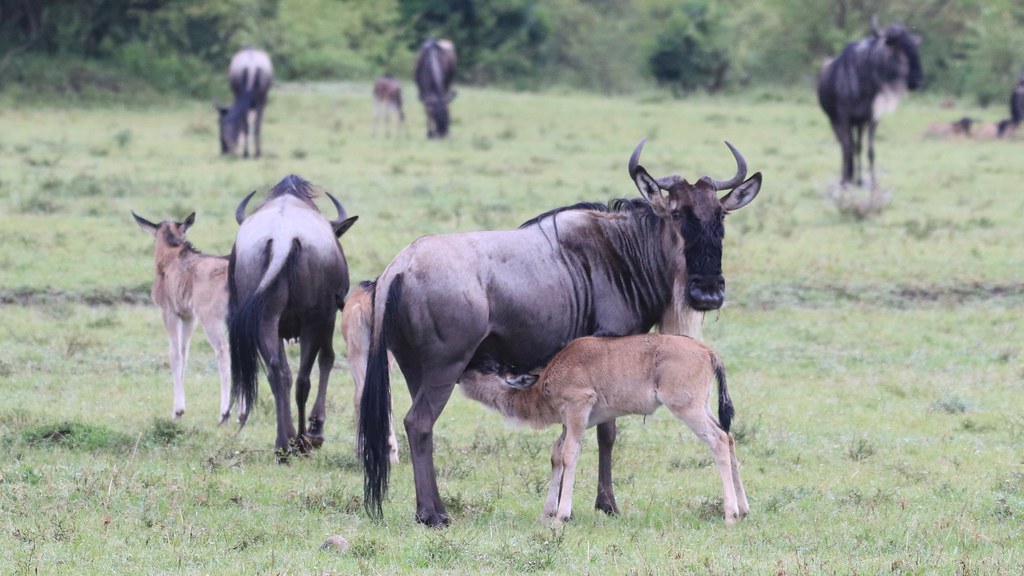 A wildebeest calf feeds before the long journey ahead

April is rainy season proper in Tanzania, with late afternoons and evenings the wettest time of day (4×4 transportation is the order of the day at this time of year). The herds split into large groups rather than the dense concentrations of calving season and drift north west in the direction of Moru and the plains of the southern Serengeti.

Best places to stay: Asilia’s Dunia Camp is a great option at this time, as are any of the central Serengeti hotels such as the Serena or Sopa. Grumeti River Camp, Kirawira and Mbalageti Lodge area of the Western Corridor.

The ‘long rains’ are still happening daily, and as the calves gain strength the herds can move faster and cover more ground.  They’re now starting to mass in the Serengeti’s Western Corridor herding along the pools and channels of the Grumeti River, with a view to crossing the crocodile infested river. 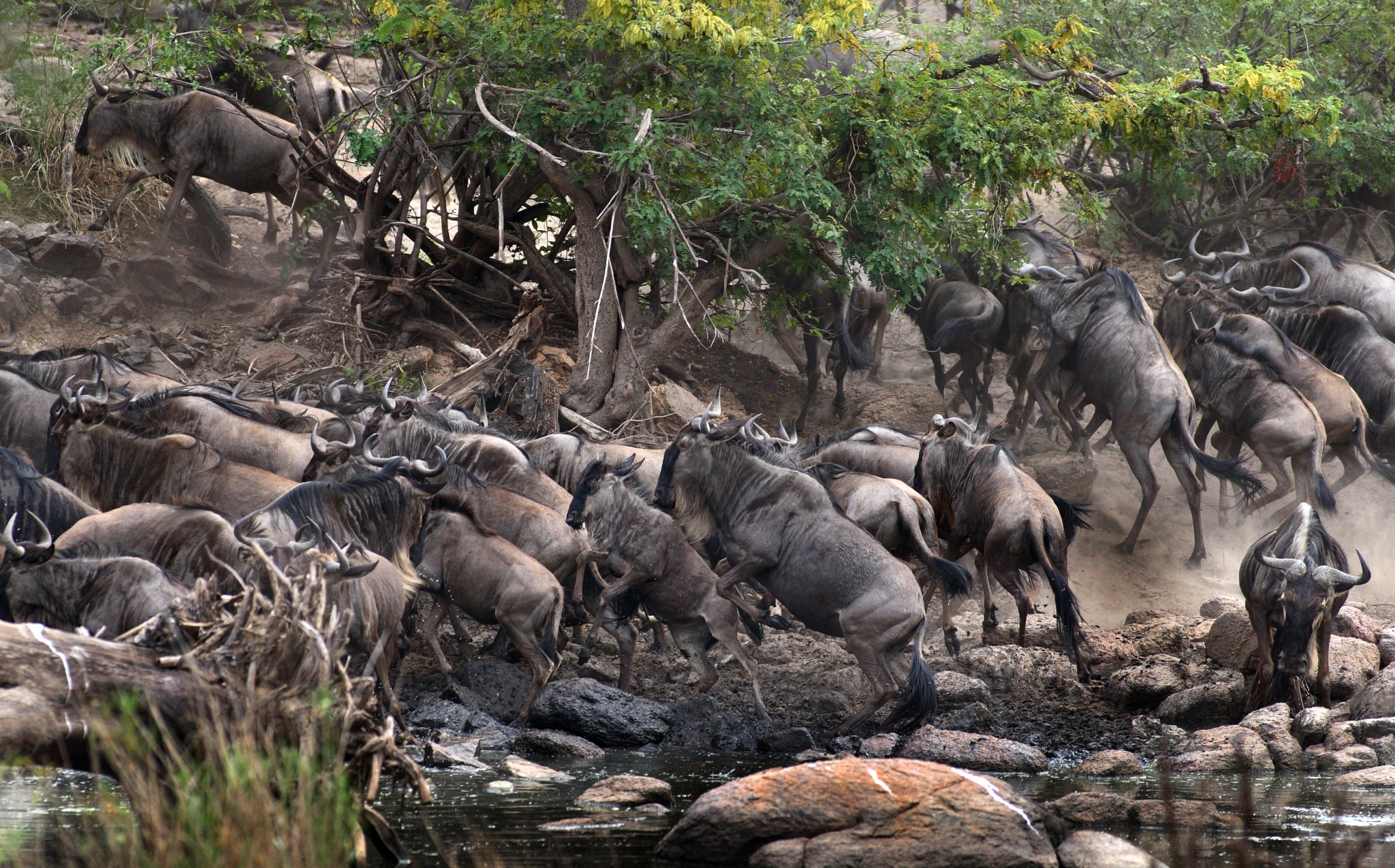 Wildebeest scrambling out of the Grumeti River

The rains are subsiding, and the herds spread out from the Western Corridor to the centre of the Serengeti, making their way northwards in long lines. One group makes the Grumeti River crossing and header through the Singita Grumeti Reserve, whilst another group heads directly to the north of the Serengeti, passing through Seronera. The herds are stretched now, with front-runners near Mbalageti River and the stragglers close to Lake Magadi,

July is mating season proper for the herds, and a noisy time to see them as they continue to make their way northwards across the plains. Still travelling in separate groups, the herds are found mainly around the Grumeti Reserve, west of the Serengeti.

The herds are now in the northern Serengeti around Kogatende and starting to take on the challenge of crossing the fast flowing Mara River. This is peak drama (and tourist) time, with the classic sight of densely packed wildebeest herds shoving each other down steep river banks to take on the river crossing across crocodile-infested waters. The Mara crossing is responsible for thousands of wildebeest deaths each year through crocodile predation, drowning, falling off the high banks or being trampled of crushed by the volume of the herd.

Best places to stay: With only a fraction of the visitor numbers that descend on the Mara, Kogatende is a good alternative.

The weather is now hot and dry, with the last of the herds completing the Mara River crossing. Once across the river the herds begin to mass again, and follow local rainfall in the Northern Serengeti and the Maasai.

October is a relatively relaxed time, with the chaotic river crossing complete for another year, and the giant herd together enjoying the rewards of fresh grazing lands around Northern Serengeti and the Maasai. The end of October sees the ‘short rains’ start, and the herd starting to move southwards.

The ‘short rains’ trigger a continuation of the cycle with the herds leaving Kenya, moving south to western Loliondo and the Lobo area in Serengeti National Park. At this point in the migration the herds split into smaller family groups to get their fill of food as they make for the fertile lands of the Ndutu plains where the rains will have rejuvenated the grasses since the herds were last there.

The cycle is now complete, with the herds now back in the Ndutu plain in the Ngorongoro Conservation Area where the area is rich in nutritious grasses again, providing the herds with the best conditions for raising their new-born calves.

Map of the Great Wildebeest Migration: 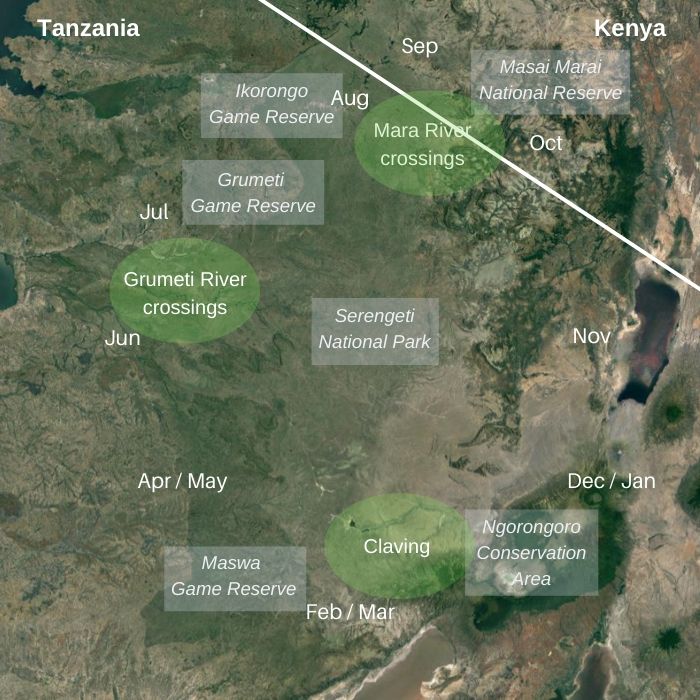 Why does the Great Wildebeest Migration happen?

Whilst the majority of wildebeest in Africa are non-migratory, why does the Serengeti ecosystem see such an epic migration of 2 million animals? Until now, scientists haven’t come up with a generally accepted, definitive answer, though there are some theories:

There’s a case that the grazing migrators are motivated by the evolving chemistry of the grass through the year as it responds to rainfall.  After the rain the plains grasses have higher levels of calcium, phosphorus and nitrogen, meaning the wildebeest could be following their taste.

There is fossil evidence across the Serengeti that suggests wildebeest have been roaming the East African  plains for over one million years. This would make the migration an innate instinct, coded into the animals’ DNA over thousands of generations.

It’s generally accepted that the wildebeests’ route is driven by the weather, as they follow the rains and the growth of new grass. Some believe that the wildebeest are reacting to distant lightning and thunderstorms, and simply heading in that direction.

Top tops for witnessing the migration

There are lots of resources out there on the Great Wildebeest Migration. Here are a few very thorough articles online:

And this coffee table book is really rather spectacular: The Magnificent Migration: On Safari with Africa’s Last Great Herds

What do you think of this article on the Great Wildebeest Migration – any information you’d like to see that we’re missing? Please let us know in the comments below.

Safari Jackets – Everything You Need To Know