The 6 Greatest Animal Migrations in Africa

what is Africa’s biggest animal migration? 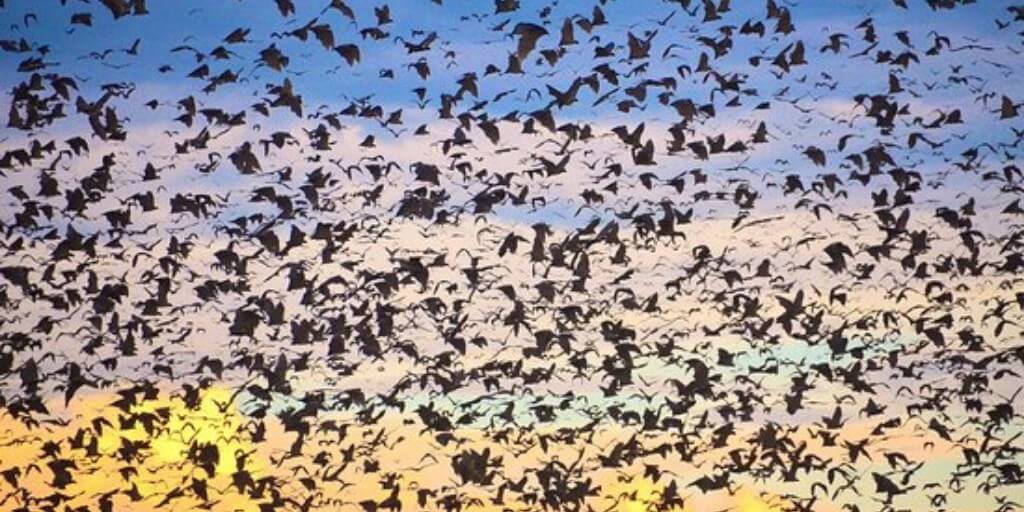 Despite most people’s assumptions, Africa’s largest wildlife migration takes place in the skies over Zambia rather than on the savannas of Tanzania and Kenya. Each year from late October to mid-December Kasanka National Park hosts a migration of over 10 million straw-coloured fruit bats, as they descend into a tiny patch of evergreen swamp forest in Northern Zambia. Though Kasanka is one of Zambia’s smaller national parks at 470 sq km, it has a broad biodiversity due to its ecosystem of wetlands and floodplains, and as a consequence, is home to nearly 500 bird species.

The bats take up residence in a few hectares of the Bat Forest in Kasanka National Park’s Mushitu swamp forest, and each evening at sunset you can witness millions of bats flying off to feed for the night. The scale of this activity is immense, with these large bats (wingspan approx 80cm) flying in a  chaotic order as far as the eye can see. There are plenty of viewpoints throughout the park, ranging from hides in trees to open public viewing areas.

Thinking of visiting the fruit bat migration? See things to do nearby: 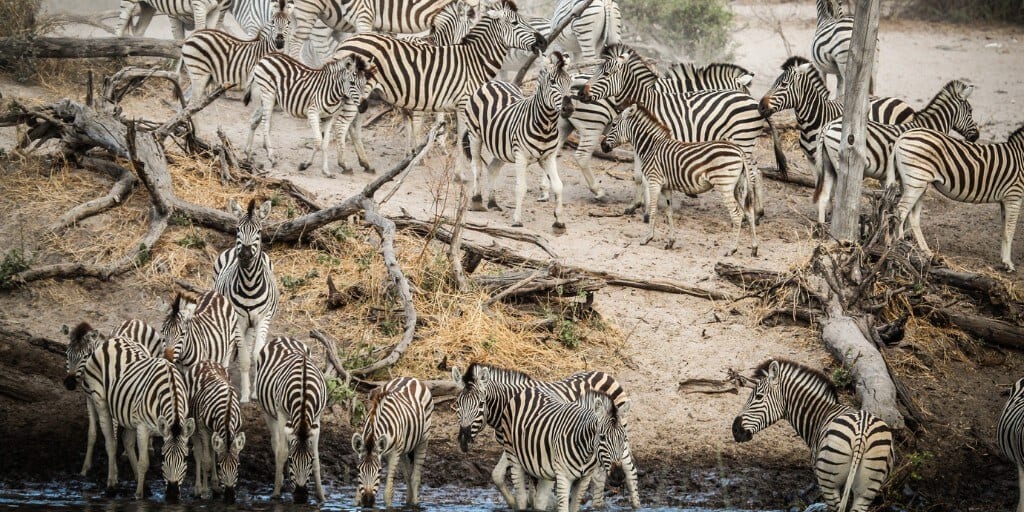 Much of the wildlife in Botswana moves seasonally, with zebras, buffalo, wildebeest, and elephants spending the dry months around the rivers – the Chobe, the Kwando-Linyanti and the Okavango – then moving into the Kalahari desert for the wetter months. It was only in 2012 that researchers started to understand just how significant some of these movements were when they tracked plains zebras travelling close to 1,000km each year, in a circuit between the Chobe river and Nxai Pan, some 400km away. This is now recognised as the longest terrestrial wildlife migration in Africa. In 2013, researchers also discovered a separate zebra migration to the Makgadikgadi Pans. These migrations were only discovered so recently because much of the terrain the migrations pass through is virtually inaccessible to humans.

Thinking of visiting the zebra migration? See things to do nearby: 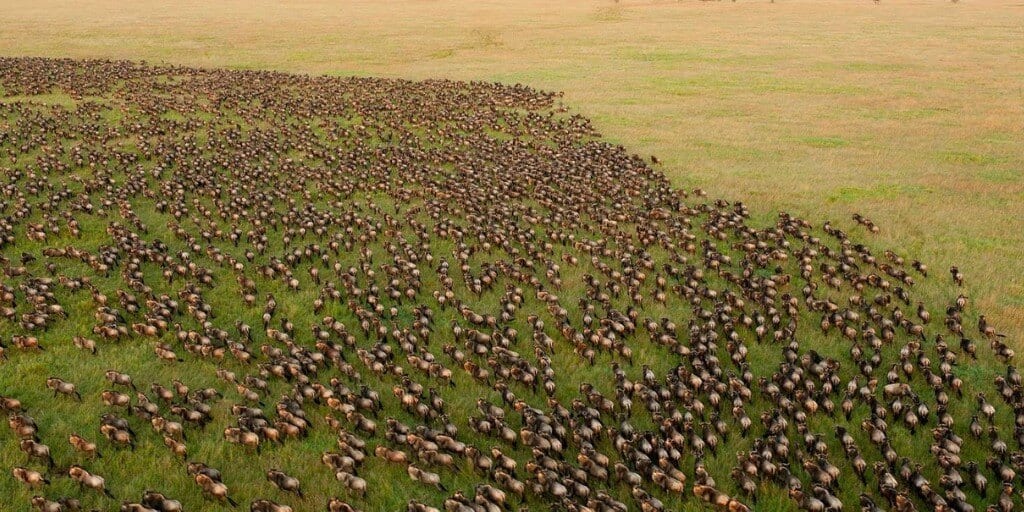 The Great Wildebeest Migration is the annual migration of enormous herds of grazers across Northern Tanzania and Kenya, and is truly one of nature’s wonders. Over two million wildebeest, zebras and gazelles migrate in a circuit around the Serengeti and Masai Mara, following the rainfall in search of fresh pastures, trailed by natures’ greatest predators.

The migration is actually a year-round circular motion, but highlights of the year include the herd crossing the Mara River in July to October and calving season on the plains of the Ngorogoro Conservation Area in February, when all the herds join together in one giant group.

Thinking of visiting the Great Wildebeest migration? See things to do nearby: 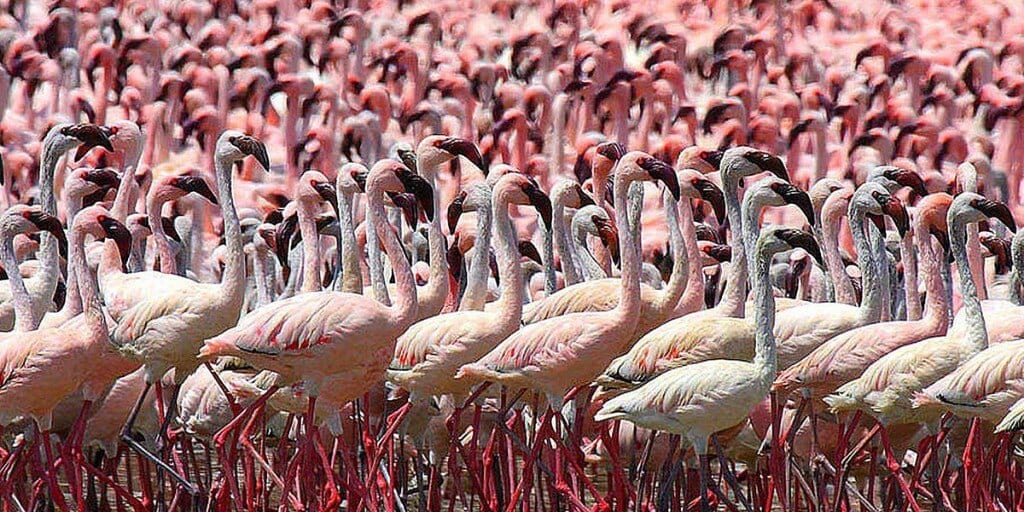 From April to June is the Rift Valley’s most under-reported animal migration, when millions of Lesser and Greater Flamingos fly in from surrounding countries to breed on the warm, shallow lakes Bogoria and Nakuru. East Africa’s flamingos in East Africa fly in huge ‘V’ formations when heading to their breeding grounds, and seeing literally millions of the long-legged, pink-feathered birds landing or taking off is an exceptionally beautiful sight.

Lesser flamingos are differentiated from their greater relatives by a darker beak and rosier feathers, and their slightly smaller size, which can be noticed when the two subspecies are next to one another. The number of flamingos you’ll see at either lake depends on the amount of algae in the lakes at any given time – less algae means fewer flamingos, and vice versa.

Thinking of visiting the flamingo migration? See things to do nearby: 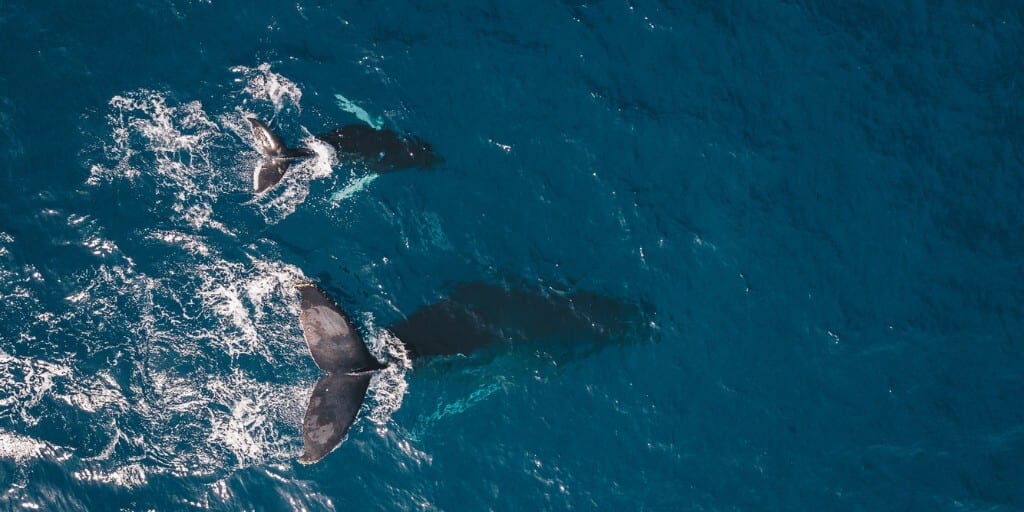 From June to November each year, Hermanus in South Africa becomes a whale-watching mecca as thousands of Southern Right whales arrive from their summer feeding grounds in the Antarctic. They migrate to the area around Hermanus to mate and give birth in the many sandy, sheltered bays around the town, with females returning to the same bays to mate and calve each year.

The whales begin their migration back to the icy waters of the Antarctic in November – a 5,000 kilometre journey done at an average of 4 kilometres per hour! Once back at their feeding grounds in the Antarctic, they spend the summer December to May feeding on up to a ton of krill and plankton a day.

Thinking of visiting the Southern Right Whale migration? See things to do nearby: 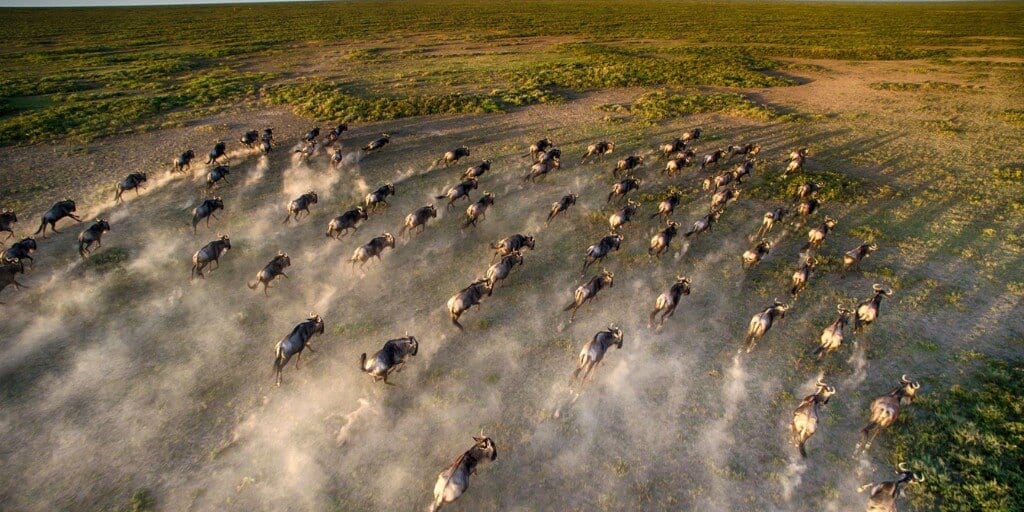 The wildebeest migration to Liuwa Plains in Zambia is one of Africa’s great natural phenomena, yet it is scarcely known. This is good news for safari buffs as it means far less crowds than at the East African Masai Mara / Serengeti migration, and, some may argue, a more authentic experience.

Thinking of visiting Zambia’s wildebeest migration? See things to do nearby:

What do you think? Any significant animal migrations we’re missing? Let us know in the comments below!

What Are The World’s Largest National Parks?

Safari Etiquette: The Rules Of Safari
Scroll to top