a visitors guide to the Masai Mara National Park

The Masai Mara National Reserve is Kenya’s most celebrated wildlife reserve, and possibly it’s best for a safari (though faces stiff competition from Amboseli and Tsavo East for this title). Created in 1968 the reserve is around 1,550 km sq, and made up of vast open grasslands, dotted with rocky hills and acacia woodland. It’s sandwiched between several large conservancies on the northern border, conservation areas to the east and west and Tanzania’s Serengeti National Park on the southern border. This makes the reserve part of a much larger East African ecosystem and a critical checkpoint for the Great Wildebeest Migration between July and October each year.

As well as the annual Masai Mara migration, the reserve is home to the big five. There are an estimated 300 lions in the Masai Mara – one of the highest densities anywhere in Africa – and sightings of the thick-maned lions are virtually guaranteed, particularly if you’re on the open plains. Cheetah, spotted hyena and other carnivores such as bat-eared fox and black-backed jackal are common, as are elephant, and there’s a small but healthy population of endangered black rhinos. Alongside the spectacular game viewing, there have been over 570 bird species recorded in the reserve, from raptors to ostrich.

The Masai Mara National Park can be broadly divided into three parts:

The eastern sector from the Mara & Talek rivers to the Ngama Hills makes up around half the reserve, and is the closest part of the reserve to Nairobi and the most visited. The Ngama hills rise above the main Sekenani Entrance Gate and are a prominent feature of the landscape, visible from all areas of the park and a useful landmark if you’re doing a self-drive safari. The hills themselves don’t have as much wildlife as the plains below, but dense thickets on the slopes attract elusive black rhino, so it’s worth doing a tour of the hills.

The plains surrounding the hills are the classic East African safari landscape of short grassed savannahs, dotted with the occasional acacia tree. For the best wildlife viewing in this part of the park take a detour from the main roads, and use the smaller tracks that wind their way between the main routes. Big cats and cheetah are common here, along with their prey of antelope, gazelle, eland and ostrich, along with plenty of elephants.
The South Mara Bridge is the only crossing between the eastern and western sectors of the park, and offers a great spot to take a bush picnic with views over a large hippo pool.

The central plains lie between the Mara and Talek rivers in the heart of the Masai Mara. Game viewing here is exceptionally reliable – particularly for big cats, many of which are habituated to vehicles, meaning you can very close for top viewing and photos without fear of driving the cats away.

Cupping these central plains are the Mara River and its tributary the Talek, the only permanent water sources flowing through the Masai Mara National Reserve. The area is covered with dozens of deep hippo holes, and the Mara River supports much aquatic life including hippo, crocodile and otter, along with plenty of birdlife. The lush forest that edges the rivers is home a strong leopard population, vervet monkeys and bushbucks.
It’s this central section of the park that is home to one of nature’s greatest shows – when the Great Wildebeest Migration comes to town and crosses the Mara River. This can actually happen several times during the wildebeests’ 2-3 months in the Masai Mara. There a number of regular crossing points, most of which are in a 5 km stretch of the Mara River, up-water from where the Talek joins the Mara. Lookout Hill, opposite the Serena Lodge is the best vantage point for seeing the herds congregating and crossing the river.

The most westerly section of the Masai Mara Reserve is known as the Mara Triangle, and is divided from the rest of the park by the Mara River on its eastern side. Oto the northwest is the Oloololo Escarpment making for a dramatic backdrop to the scenery as it 400 meters above the wildlife grazing on the plains. In July and August the grasslands of the Mara Triangle are heaving with wildebeest, zebra and gazelle – as well as their many predators. 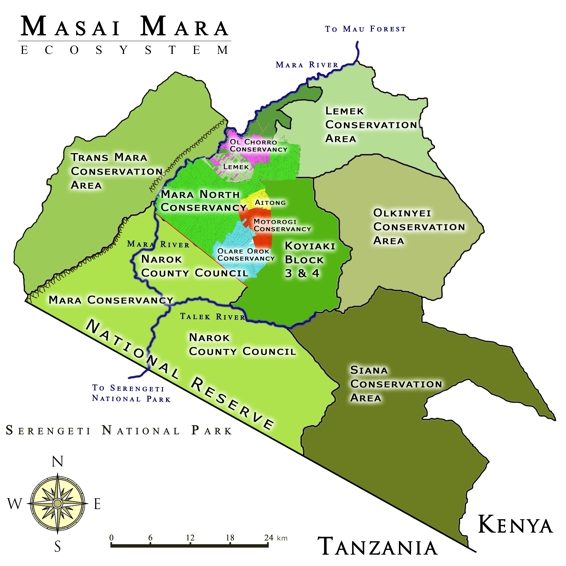 Getting to Masai Mara Game Reserve:

The Masai Mara is 270 km from Kenya’s capital Nairobi, and the 4-5 hour drive between the two via Narok can be tough going. Most people opt for a 45-minute flight. In the reserve itself, the eastern side of the park now has all-weather roads, making for easy driving conditions. Through the rest of the park roads are almost all un-signposted dirt tracks and can be rough driving requiring a 4X4. If you’re planning a self-drive safari there is only one bridge inside the reserve across the Mara River, so plan your route and time accordingly.

The Masai Mara is a year-round safari destination, with big cats and big game on view all of the time. December to February are the driest months and a great time to see the big cats in action. The great migration Masai Mara portion usually takes place from July to October. As the migration is a natural event that’s largely driven by the weather, these dates are not 100% certain, but very likely. Travelling to the park outside of peak season will mean no migration, but fewer crowds and cheaper accommodation.

There are dozens of camps and campsites in the eastern sector catering for all budgets, in the park and fringing the borders of the park. The central plains area is serviced by a handful of high-end safari camps. In the Mara Triangle, there’s only one camp (Little Governors) and one lodge (Mara Serena, with its prime position overlooking the Mara River crossings used by the great migration), though there are a number of high-end camps on the edge of the Mara Triangle  Mara Engai Wilderness Lodge, Kichwa Tembo, Bateleur Camp, Mara Siria, Kilima Camp and Mpata Safari Club.

Game drives are often confined to the same section that the safari lodge or campsite is in, so check with your lodge before booking. If you’re visiting for more than one night it’s a good idea to divide your time between different hotels so you can see as much of the Mara as possible.

Search & book hotels in and around Masai Mara National Park

Have you been to the Masai Mara or have any tips for visiting this game reserve? Please share with us in the comments section below!