Most Venomous Snakes In The World

11 of the world’s most dangerous snakes

Interested in finding out about the most venomous snakes in the world? According to the World Health Organisation, there are more than 600 species of venomous snakes on Earth, but only around 200 do any real damage to humans.

There are several ways to define how venomous a snake is, so understanding the criteria used for any list is important. Some lists look at the lethal dose of venom needed from a snake to kill a mice or person whilst others look at how many mice or humans one bite from a snake would kill. Other lists are more interested in the deadliest snakes, so look at how many humans are killed each year by the snake, or at the percentage of humans killed by a snake bite if left untreated.

In truth, all of these factors should be taken into consideration when looking at the most venomous snakes, so we’ve done just that.

Below is an objective list of 11 of the world’s most venomous snakes, along with an image and some information about each species: 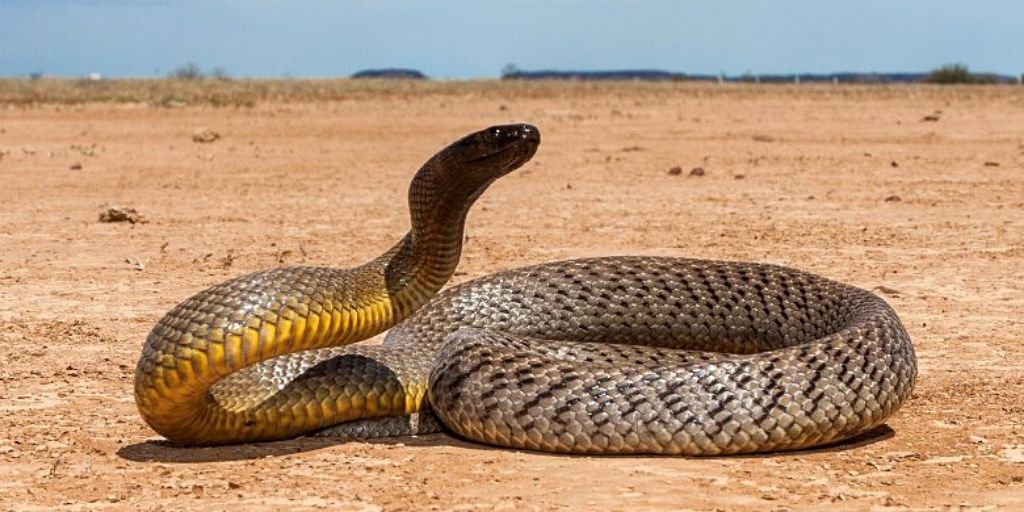 General regarded as the world’s most venomous snake, the inland taipan is appropriately known as ‘the fierce snake’.

Its paralyzing venom consists of taipoxin, a mix of neurotoxins, procoagulants, and myotoxins causes hemorrhaging in blood vessels and muscle tissues and inhibits breathing. Its bite is lethal in more than 80% untreated cases, and can kill a human in under an hour. 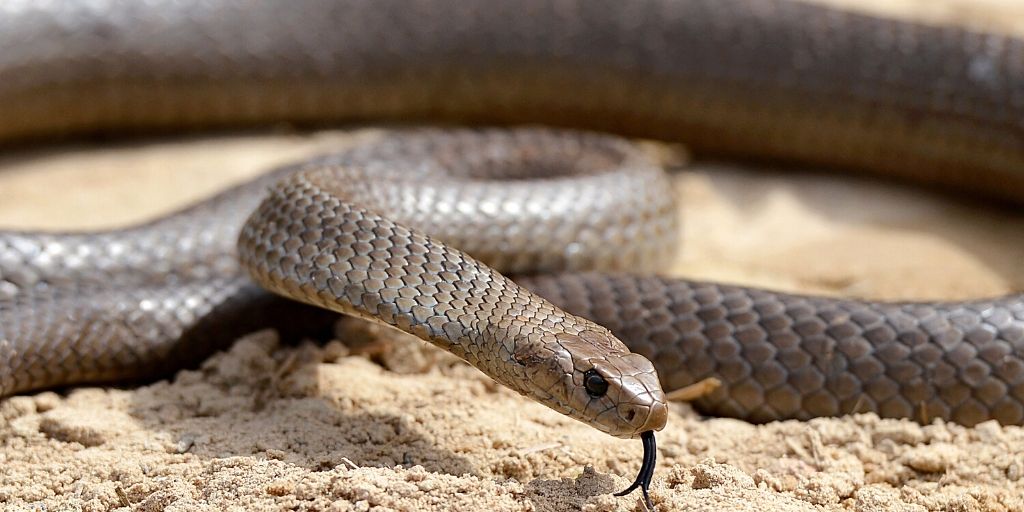 Native to Eastern and Central Australia and Southern New Guinea, the solitary and fast-moving eastern brown snake is found in most habitats apart from dense forests. They measure up to 2 meters long with a slender build, and no demarcation between the head and neck. Although it’s called the eastern brown snake, it’s found in a range of colours from pale brown to black, and has a creamy yellow underside.

It’s considered the world’s second-most venomous land snake and is responsible for about 60% of snakebite deaths in Australia. In a full display, the snakes’ head rises high off the ground, coiling to an ‘S’ shape to attack, often resulting in lethal bites to the victim’s upper thigh. The venoms’ main effects impact the circulatory system, resulting in haemorrhage, cardiovascular collapse, and cardiac arrest. 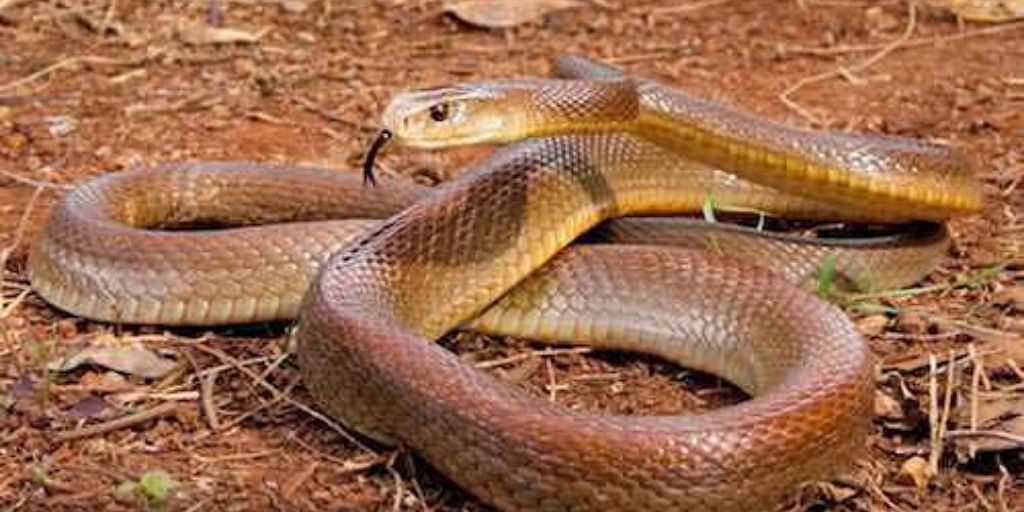 The coastal taipan is found in coastal regions of Northern and Eastern Australia and the nearby island of New Guinea and produces venom that is almost identical to that of the inland taipan – considered to be the most venomous snake in the world.

The head of the coastal taipan is long and narrow (similar to the black mamba) with a slender body with colours from light olive to black. Once it spots its prey the snake freezes, then throws itself forward making several quick bites. It then releases the prey and waits for the venom to take effect, before taking its meal. 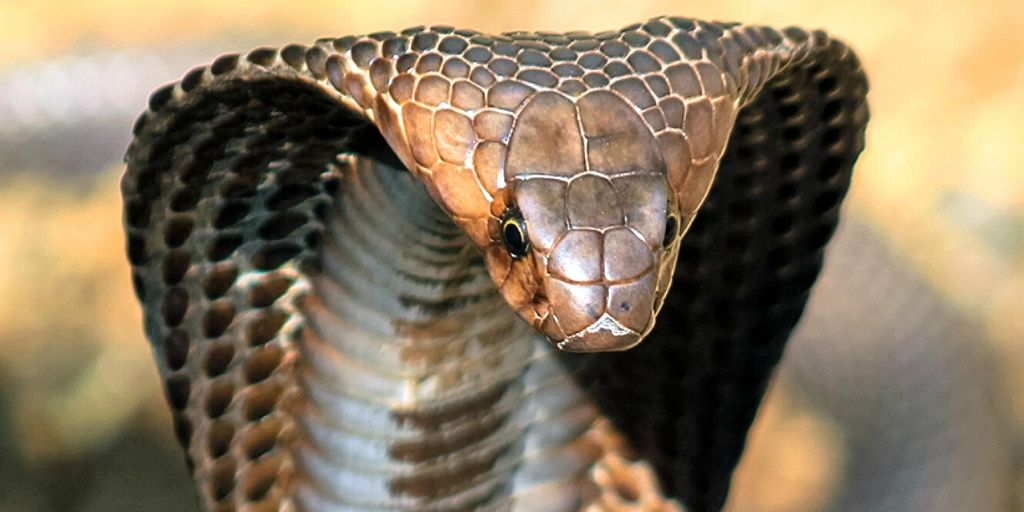 The King cobra is the world’s largest venomous snake, growing up to 5.5 meters in length. The species mainly lives in forested areas in Asia – from India through Southeast Asia to the Philippines and Indonesia. With a 50% fatality rate for untreated human bites, the King cobra deserves to be high on this list of venomous snakes. A bite from a King Kobra can even kill an Asian elephant in just a few hours! 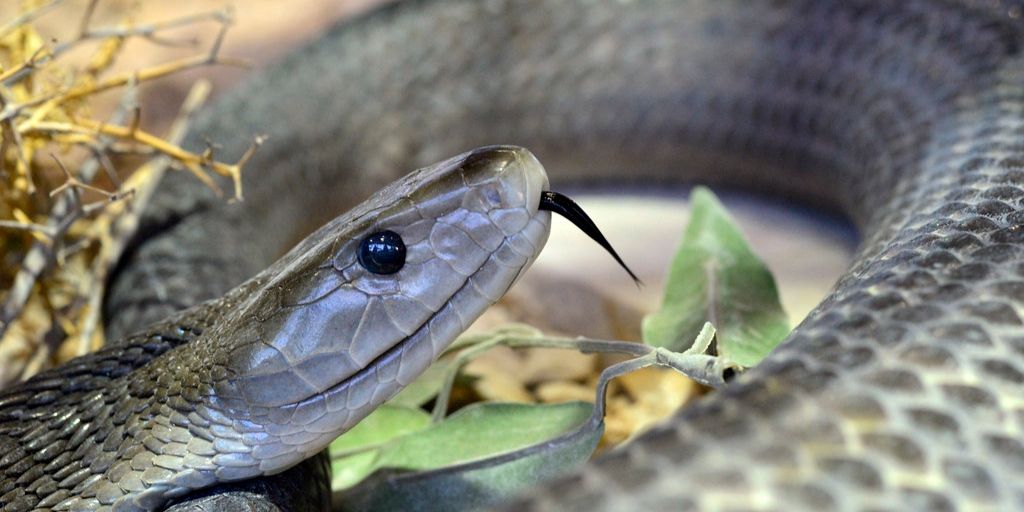 The black mamba is the only snake on this list to live in Africa (the dry bushlands of Eastern Africa), using its speed to catch prey and inject an extremely toxic venom. Often regarded as the fastest snake in the world, it’s actually beaten into second position by the sidewinder.

Growing up to 4 meters long, the black mamba is a slender, agile snake, which helps it reach speeds of up to 19 km per hour in short bursts on open ground. As with the sidewinder, the black mamba uses lateral undulation,  moving in an ‘S’ shape and pushing off objects in its path to help gain momentum.

The combination of speed, venom, and aggressive attitude is what makes the black mamba such a feared snake across Africa – and, indeed, puts it on the list of most dangerous animals in Africa. As with all snakes, mamba will try to avoid confrontation with humans, but if backed into a corner they are more than happy to stand their ground and fight. 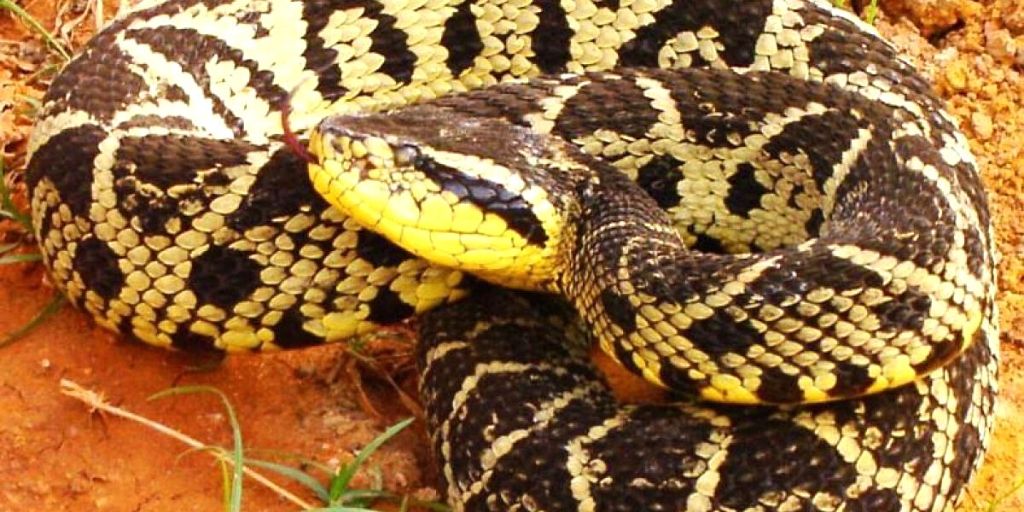 Spanish for ‘yellow beard’ these Central and South American snakes are distinguished by their flattened heads which are set apart from the rest of their bodies. Growing up to 1.8 m long, females are the thicker and longer of the species, with larger heads and bigger fangs.

Barba amarillas are irritable and fast-moving, and have a reputation for being unpredictable. Its venom is necrotizing, extremely painful, and often deadly. Combine this with its ability to project almost two meters and to bite with it’s head high above the ground, and it’s easy to see why the barba amarilla makes this list of most venomous snakes. 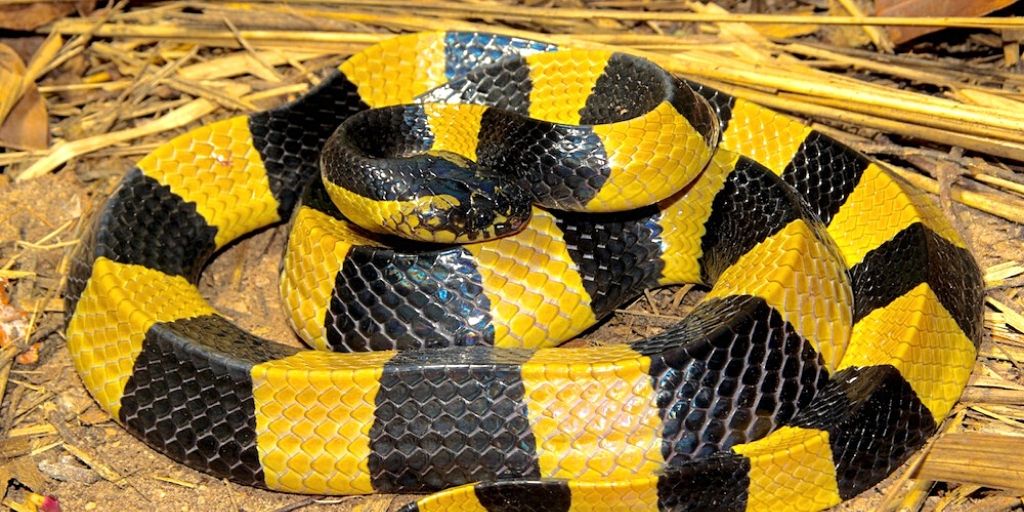 The banded krait is a highly venomous relative of the cobra found across the Indian Subcontinent and Southeast Asia. Reaching lengths of over 2 meters this krait is easily identified by its bright yellow and black crossbands and the marked vertebral ridge.

It’s a shy, nocturnal snake that doesn’t go out of its way to bite people, though when bites do happen their venom can cause respiratory failure and potentially suffocation. The mortality rate for untreated bites is thought to be around 10%. 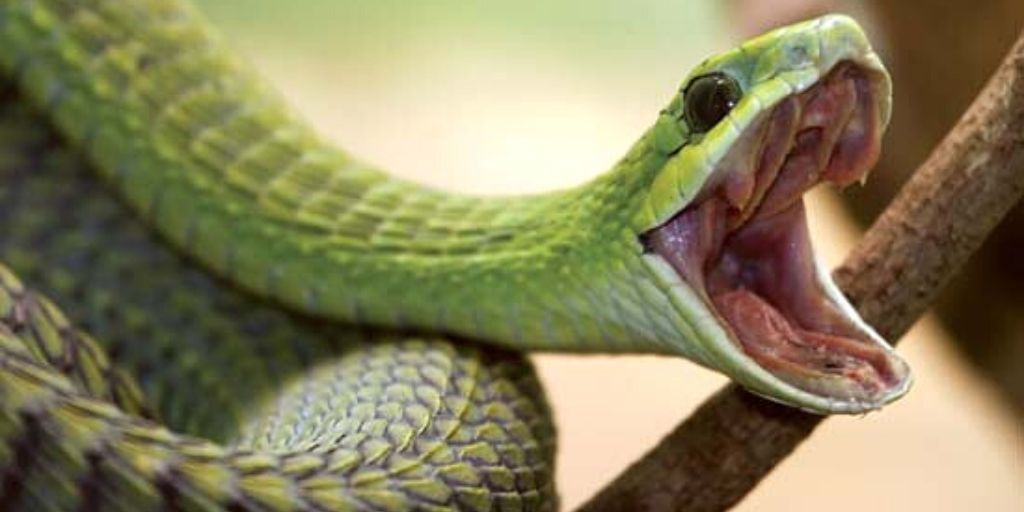 The boomslang is a, venomous snake native to sub-Saharan Africa measuring up to 1,6 meters, and has a unique look, with oversized eyes in an egg-shaped head. Its name means ‘tree snake’ in Afrikaans, and it hunts by mimicking a branch, extending the forward part of its body motionless from a tree.

It has a highly potent venom which disables blood coagulation and leads to internal and external bleeding, killing the victim. The venom is delivered through large fangs located in the back of the jaw., which it can open to 170° when biting.

The boomslang is regarded as a timid snake, inflating its neck and assuming an ‘S’-shaped striking pose, but generally only biting humans when people attempt to handle, catch, or kill the snake. 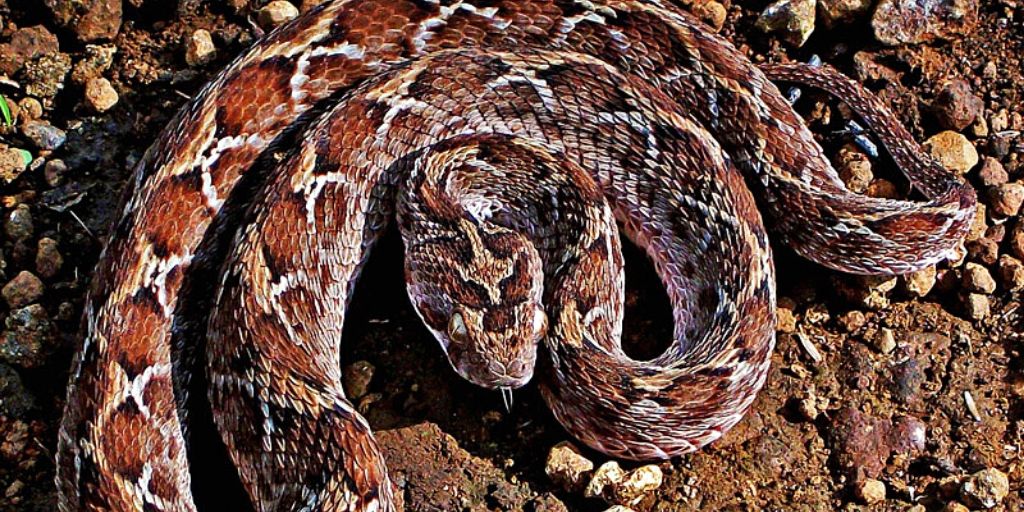 Whilst the venom of the saw-scaled viper is lethal in less than 10 percent of untreated victims, the species is often found in populated areas, and its aggressiveness means it bites early and often. 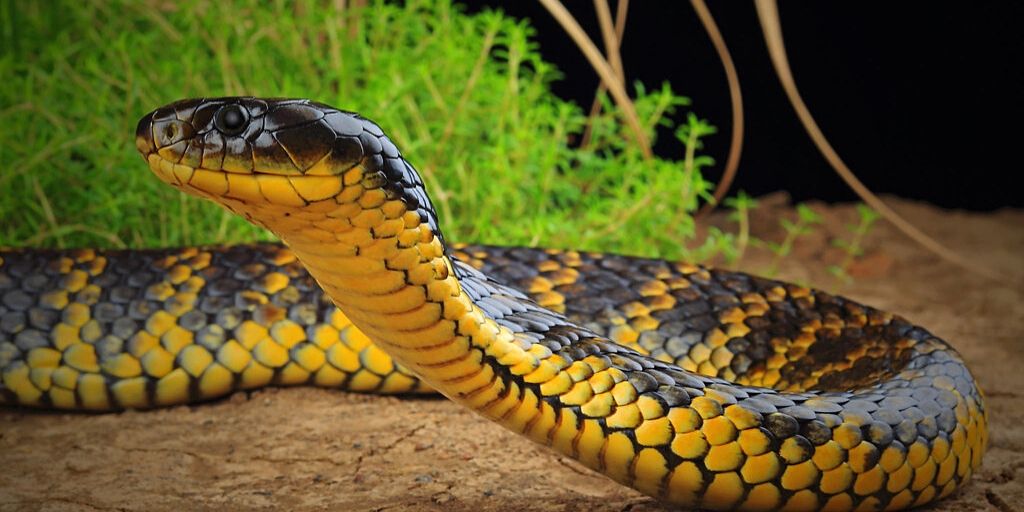 The highly venomous tiger snakes are endemic to Southern Australia and its coastal islands, including Tasmania. Tiger snakes are highly variable in size and coloring, (from light yellow to jet black) though usually banded, hence the name.

The thing they all have in common is the potent mixture of neurotoxins, coagulants, hemolysins, and myotoxins they inject into their victims. Fatal to hums if left untreated, tiger snake bites account for an estimated 17% of Australian snakebite victims. 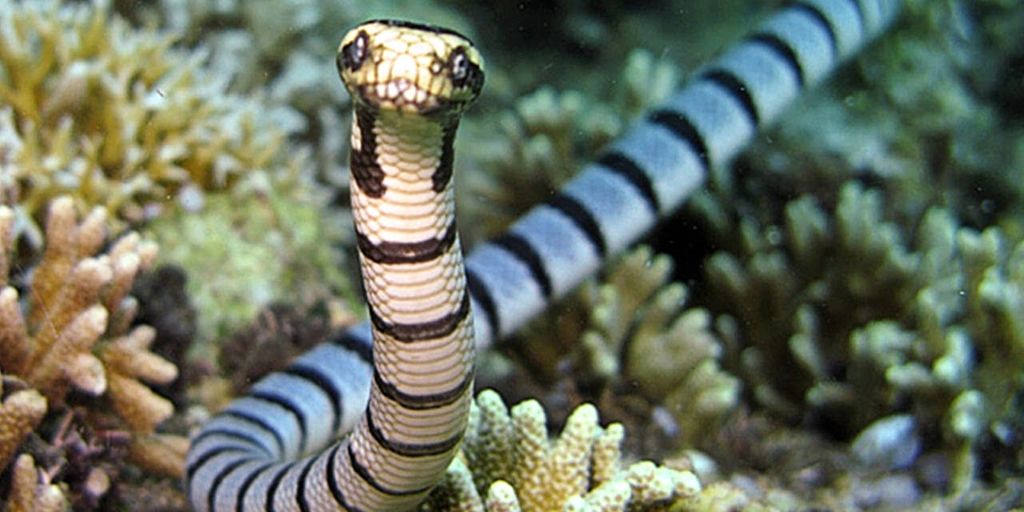 The faint-banded sea snake is found from the Indian Ocean to Gulf of Thailand and the seas around northern Australia. Fully grown adults reach around one meter long, with a thin yellowish body and dark green crossbands.

The species has a timid temperament, and bites tend to occur only on fishermen handling nets… which is a good thing, as the faint-banded sea snake is extremely venomous, measured as 0.24 mg/kg when delivered intramuscularly to mice.

What’s the difference between most poisonous and most venomous snakes?

People often talk about poisonous snakes, but it’s worth taking a moment to clarify the definition of poisonous vs venomous.

The term poisonous is used for any living things that unload toxins when you eat them.

Almost all snakes transfer their toxins via a bite, so are venomous rather than poisonous. One exception to this rule is the small garter snake with a harmless bite, but is toxic to eat as it absorbs and stores the toxins of the newts and salamanders it preys on.

And that’s your lot for the world’s most venomous snakes. Did any surprise you? Or have you met any of these snakes in the wild? Please do share your experiences in the comments section below!

Safari Suits – Everything You Need To Know
Scroll to top