the lowdown on Sri Lanka’s national parks for safaris

We’re the first to admit that Sri Lank is not part of Africa But Sri Lanka does offer some high-quality safari options, as well as some unique wildlife and terrains that you can’t see in Africa, hence the inclusion of national parks in Sri Lanka on SafarisAfricana.

As a consequence of the recent civil war, some parks have been off-limits to the public, and are now starting to open up. Overnight access is still an issue in the ever-popular Yala National Park, and the bungalow accommodation is closed for the time being. All national parks in Sri Lanka are managed by the Department of Wildlife Conservation who are able to provide the most up to date park access information. 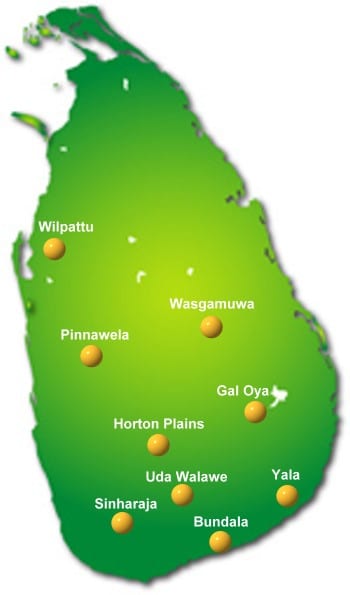 Bandula National Park
A large wetland sanctuary for migratory birdlife, consisting of a maze of lagoons and waterways.

Horton Plains National Park
Undulating 2000m plateau in the shadow of 2 of Sri Lanka’s three largest peaks. Sublime scenery taking in wild grasses, rocky outcrops and waterfalls dropping into misty lakes… and the chance of spotting a leopard or two.

Kaudulla National Park
Formed as part of an elephant migration corridor, now home to over 250 elephants and plenty of cat life.

Self-drive safaris are an option in some of Sri Lanka national parks, though you will need access to a 4WD to get the most out of the parks due to the clay tracks. If this sounds a little too much effort for you check out our guide to safari tour companies in Sri Lanka to find someone who can drive for you!

Have you been to a national park in Sri Lanka, or got some useful information you’d like to share on the topic? Please feel free to get involved in the comments section below!