a guide to the 10 types of African wild cats

Big cats may steal the show when it comes to African wildlife viewing, but the wild cats of Africa come in all shapes and sizes. Africa is actually home to ten unique species of wild cats that can be found right across the continent – in habitats ranging from savannahs and jungles to wetlands and deserts.

Despite their differences all African wild cats – and indeed all cats around the world – share a number of common characteristics. They all have retractile claws, strong, flexible forelimbs, and slender muscular bodies. Additionally, all cats are carnivores and, excluding lions who hunt in groups, are all solitary predators that stalk or ambush their prey.

So here is the list of the ten wild cats of Africa, categorised by big cats, medium cats, and small cats: 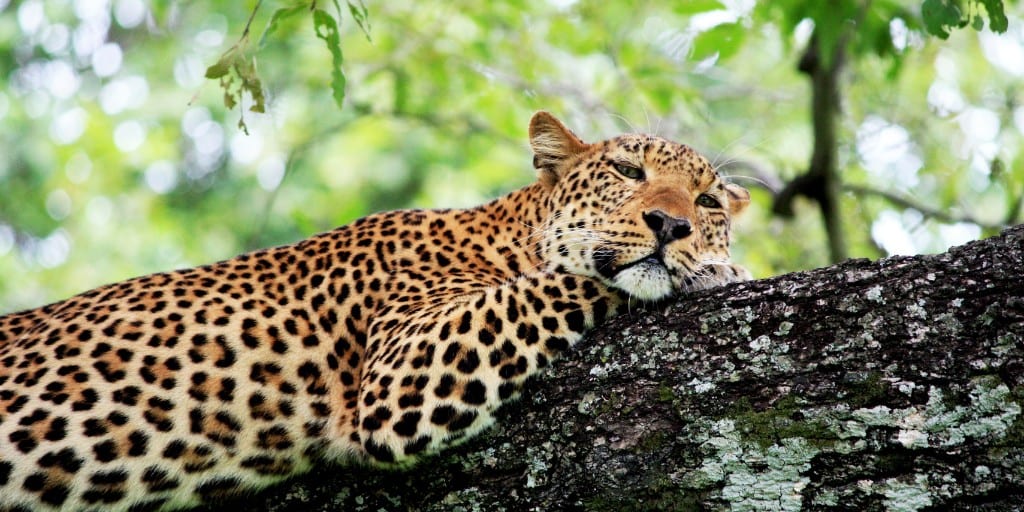 Range & Habitat: Leopards live in more places than any other big cat, and are comfortable in almost any habitat, including deserts, rainforests, woodlands, grassland savannas, mountain, scrub and swamps. Leopards are one of the few big game species found outside national parks. 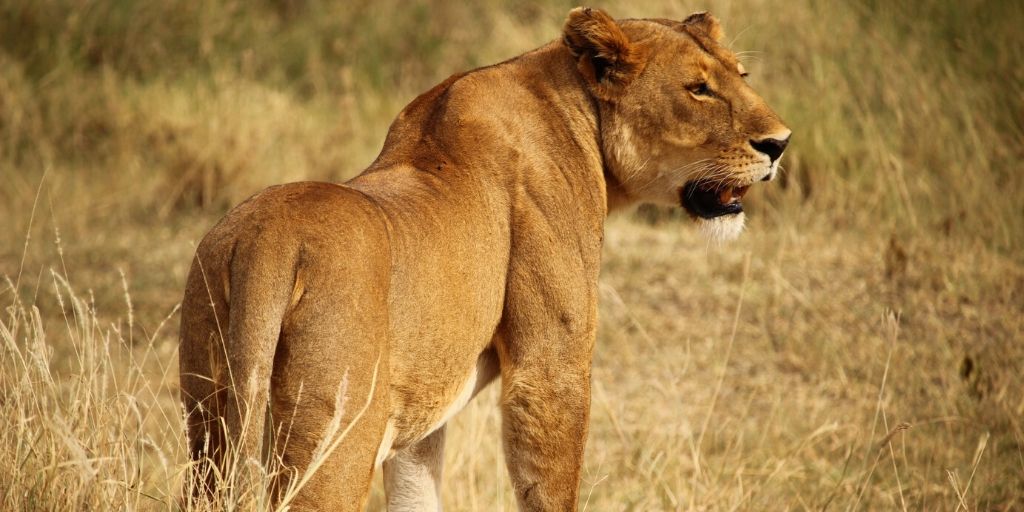 Speed: At a maximum speed of 80 kilometers per hour, the lion is the second fastest land animal in Africa.

Range & Habitat: Lions tend to prefer grassland, savanna, dense scrub, and open woodland. They are found across sub-Saharan Africa, and also in a small part of north-east India. 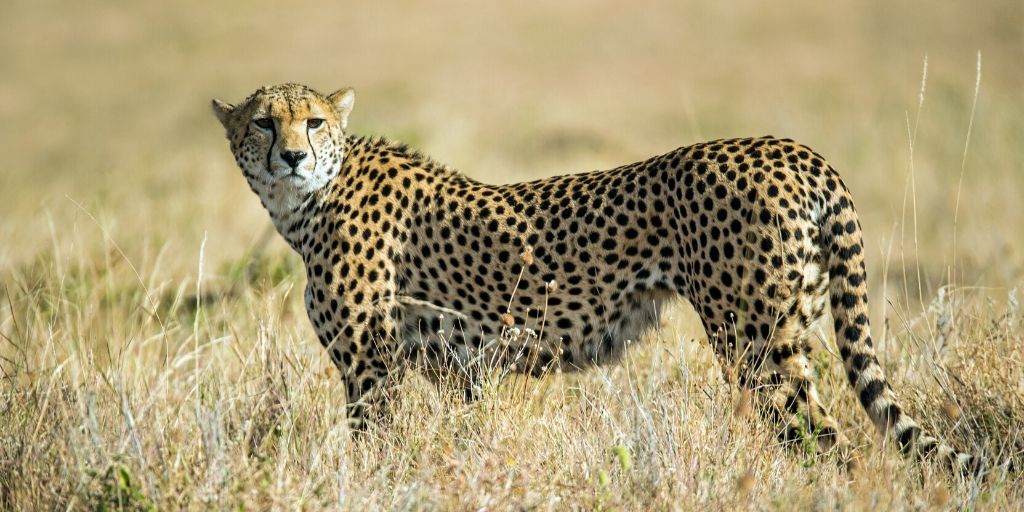 Speed: With a maximum speed of 92 kilometers per hour, the cheetah is the fastest land animal in the world.

Diet: Cheetahs hunt small and medium-sized mammals such as hares, impalas, wildebeest calves, and gazelles, either on their own or in small family groups.

Range & Habitat: Cheetahs are found in Eastern and Southern Africa (though are also found in Iran and Afghanistan), generally confined to very small, fragmented habitats of in savannahs, dry and scrub forests, and grasslands.

Caracal (meaning ‘black ears’ in Turkish) are common across Africa, and also native to the Middle East, and parts of Asia and India. They are characterised by their stocky body on long legs, tufted ears, and uniform sandy colour. At 0.5 meters tall they weigh in at just 12 kg, and spectacular acrobats, able to leap 3 m into the air. 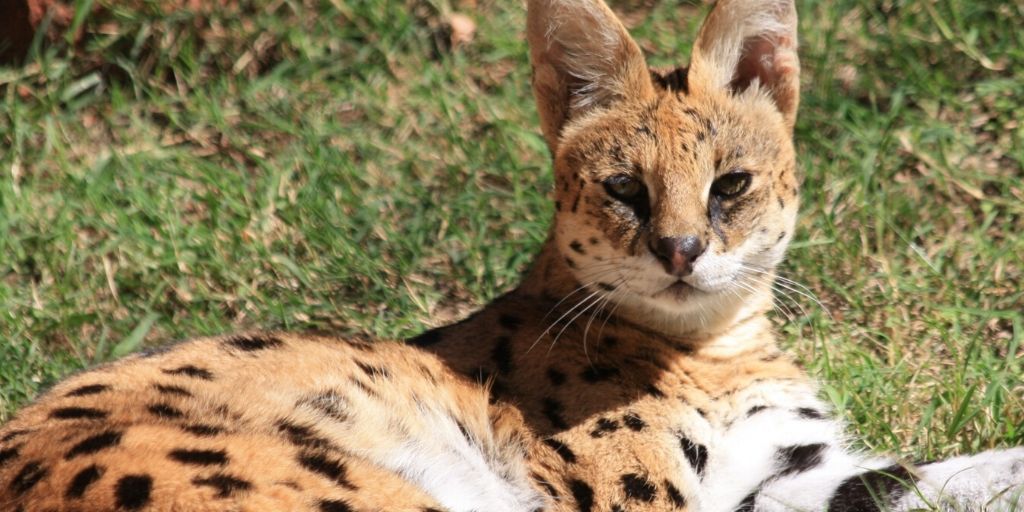 The slender, long-legged serval is widespread in sub-Saharan Africa outside of rainforest regions and rare in North Africa. It’s characterised by a small head, large ears, a beautiful golden coat with black spots and stripes, and a short, black-tipped tail. With its body shape and excellent hearing, the serval is well equipped for hunting, ambushing prey at night with pounces of up to 3.5 meters to stun and kill. 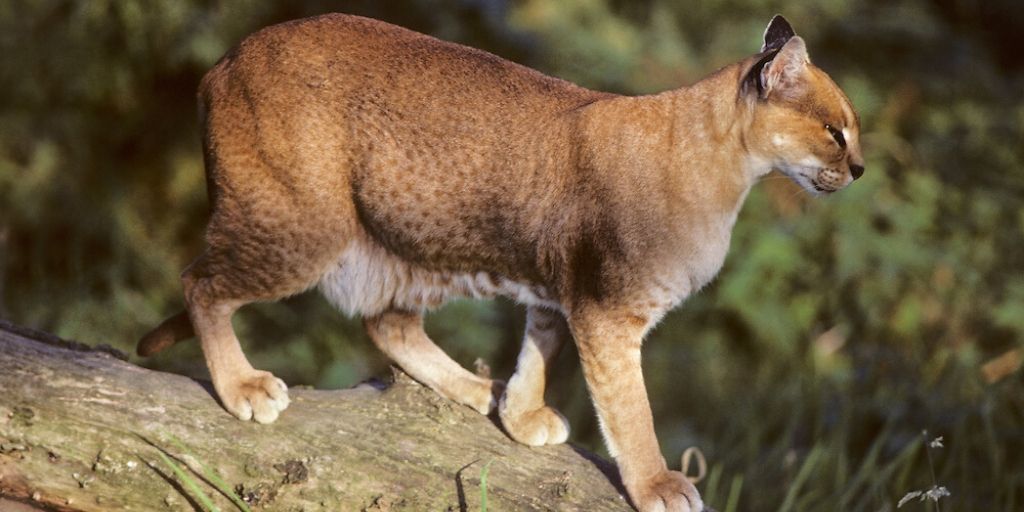 The African golden cat is an elusive animal that’s a close relative of the caracal and the serval. It’s the only African cat that lives in the tropical forests of West and Central Africa, preferring dense, moist habitat with heavy undergrowth, but also found in cloud and bamboo forests and moorlands.

Named for the colour of their fur, they are powerful, sturdy animals are about twice the size of a domestic cat. Their size allows them to successfully hunt mammals as large as antelopes, duikers, and young giant forest hog, as well as smaller prey such as rodents, birds, and small monkeys. 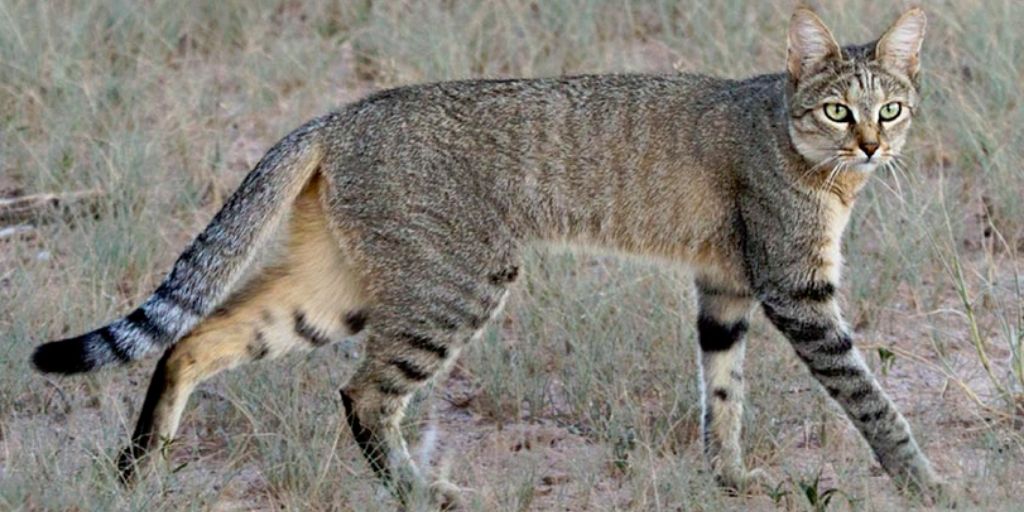 The African wildcat is native to Africa, the Middle East and parts of Southern Asia and China, and are thought to be the ancestors of our pet cats, first domesticated in Egypt around 9,500 years ago. Weighing up to 4.5 kg, they stand around 0.25 meters tall at the shoulder.

The African wildcat’s fur is light sandy grey, with white fur on the belly and on the throat, and slightly tufted ears. They are nocturnal animals, with excellent hearing allowing them to locate prey to including rodents, hares, birds, and lizards. 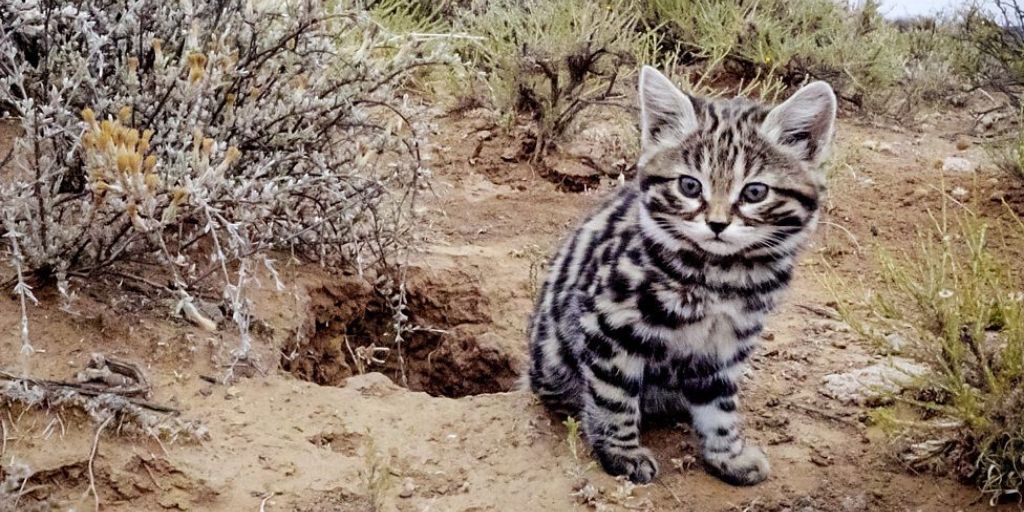 The black-footed cat is the smallest wild cat in Africa and one of the smallest wildcats in the world, weighing 2 kg and standing 0.25 meters tall. They’re nocturnal animals, and rarely seen, found only on the grassy plains and desert areas of South Africa and Namibia. It’s estimated that these cats can kill and eat up to 3,000 rodents a year, and a desert adaptation means they can obtain all the moisture they need from their food. 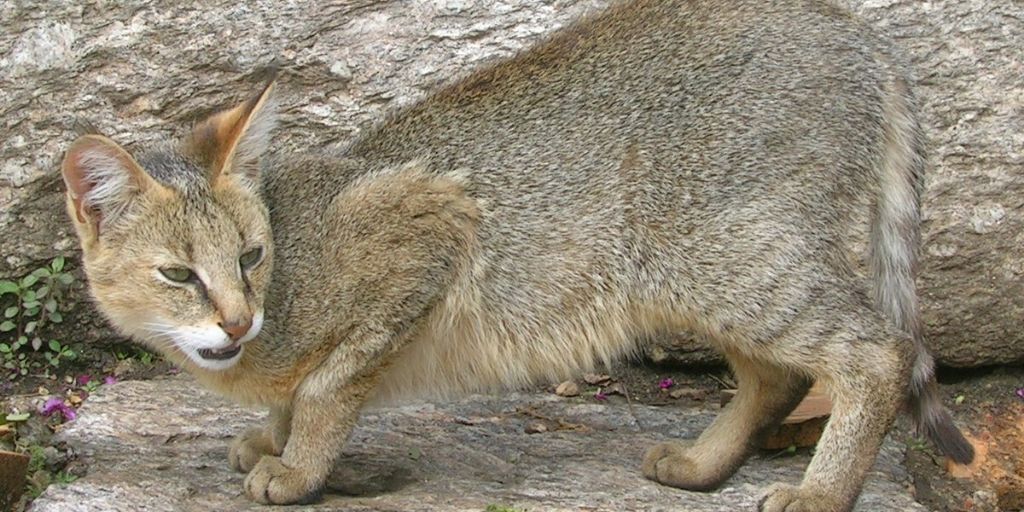 The jungle cat (also known as a reed cat or swamp cat) is found across the Middle East, Asia, and southern China, and makes it into this list of African wild cats due to its occurrence in parts of Egypt. Despite its name, the jungle cat inhabits wetlands with dense vegetation rather than jungles, camouflaged by its uniformly sandy, spotless fur. As with most small and medium-sized cats, the nocturnal jungle cat hunts by stalking its prey, followed by a sprint or a leap. 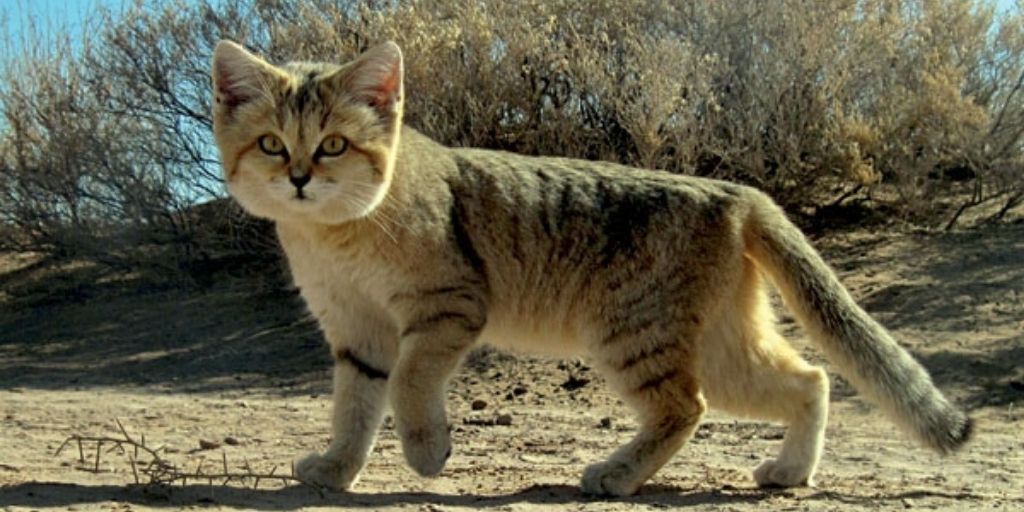 The sand cat is the only wild cat in Africa – or the indeed world – that lives solely in desert environments, with wide distribution across the Sahara, as well deserts in the Middle East and Central Asia. Also known as the dune cat and ‘the cat that digs holes’, the thick, long hair on the soles of their feet is an adaptation to protect then against the desert extremes of hot and cold temperatures. They are characterised by their flat, wide head and short legs, and stand 0.35 meters tall, weighing in at 3.5 kg.

And that’s the complete list of African wild cats. What do you think – any wild cats that surprise you? Let us know in the comments section below! 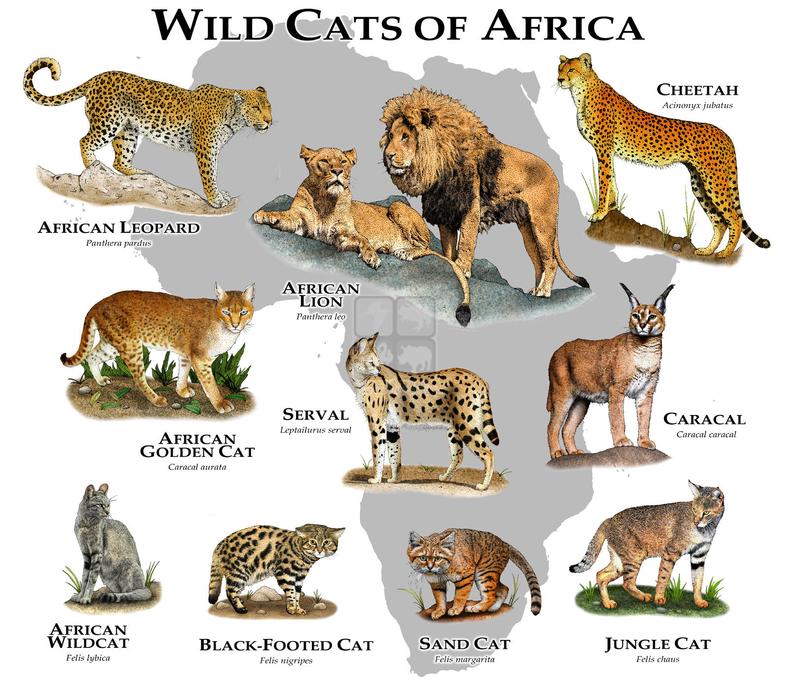 Poster of all 10 wild cats of Africa

The Nine Deserts Of Africa