Namibia safari guides – where & when to go, and what to see & do

Wedged between the Atlantic coast and the Kalahari Desert, Namibia is one of Africa’s hidden gems that is slowly emerging as a popular tourist destination, with safaris in Namibia high on the to-do list. A sense of freedom is generated by an epic, empty landscape with wide horizons, unpolluted skies and one of the world’s lowest population densities. These facts, combined with a plethora of large game animals and a frontier feel make Namibia the ultimate photography or self-drive safari destination, and too bad either if you’re looking for an indulgent luxury safari experience.

The Namib Desert is the world’s oldest desert, and a predominant feature of the country, extending all the way up the Atlantic coast on the western side of the country. The desert is scored by a number of rivers coming down from the Central Plateau – most of which are now permanently dry, or only flow during the rainy summer months. The north of Namibia is dominated by the huge, permanently flowing rivers of the Kuene, Kavango and Zambezi, which make up the borders with Angola, Botswana and Zambia respectively. This part of the country is lush and green with dense woodlands most of the year, and home to several small national parks that teem with wildlife and birdlife. The rest of the country is made up of scrubby bushland of the higher Central Plateau, trailing off into the Kalahari desert in the east.

Wildlife in Namibia is varied, and taking a safari in Namibia will allow you the opportunity to see all of Southern Africa’s mammals. As well as the big five, the Namib Desert is home to the exceptional and endemic desert-adapted elephant and rhino. In the Namib Desert and elsewhere in Namibia a truly extraordinary fact is that the country has one of the densest congregations of animals in the world, combined with one of the sparsest human populations, making for fantastic wildlife viewing. Unlike much of the rest of Africa, habitat destruction is not generally an issue in Namibia, and you can expect to see large mammals roaming the wilderness as you drive between Namibian national parks or towns. This means you need to be ready for a safari experience in Namibia at any time you’re not in a town! 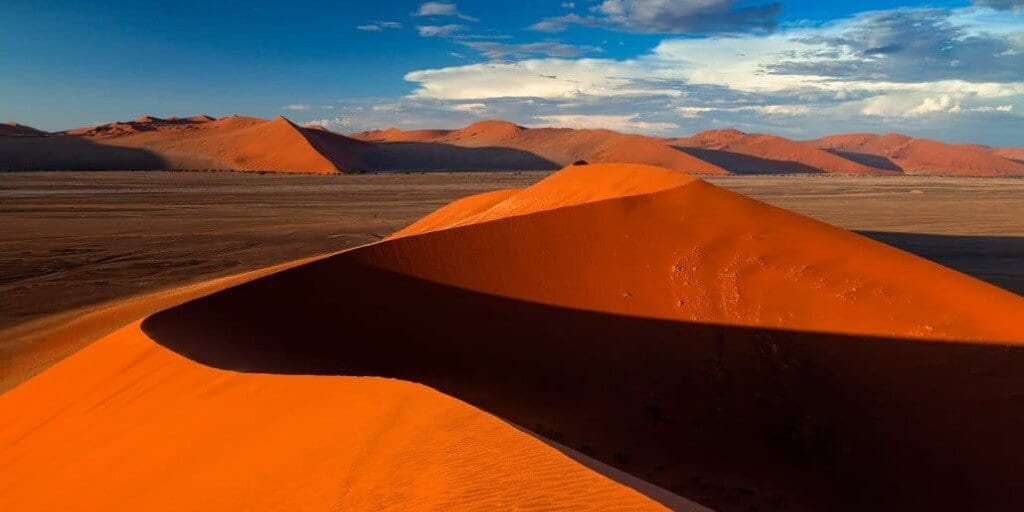 Discover the sand dunes of Sossusvlei with a dawn game drive and hike to top of a dune to watch the sun rise over the Namib desert. The dunes and surrounding area are truly specatular, reaching almost 400 metres high and providing inspiration to any budding photographer. 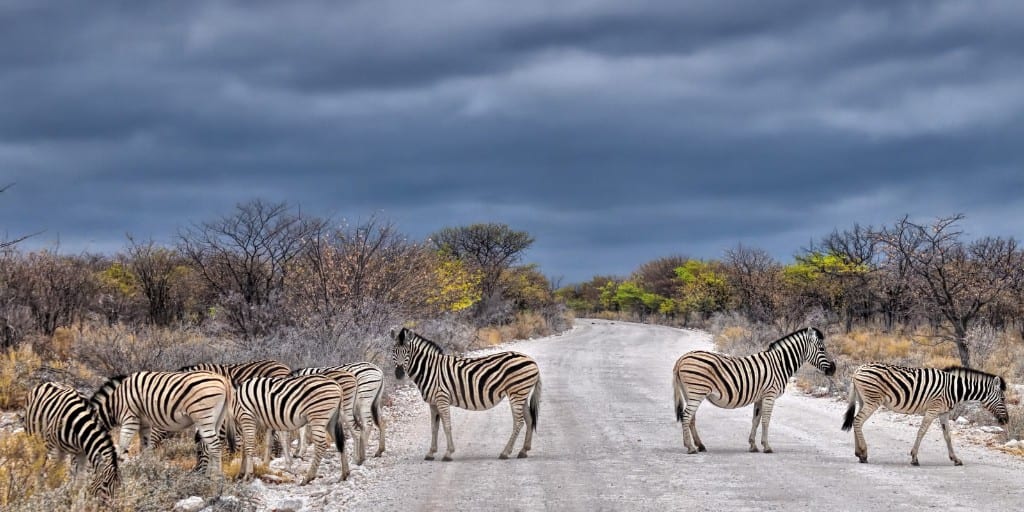 Take a self-drive safari tour around accessible but wild Etosha National Park – one of the world’s premier national parks. 763 km of open roads around the park make for the ultimate self-drive safari. The park is based around a huge salt pan, and seems inhospitable to life, but a string of watering holes brings herds of antelope species and their prey from the surrounding scrub. 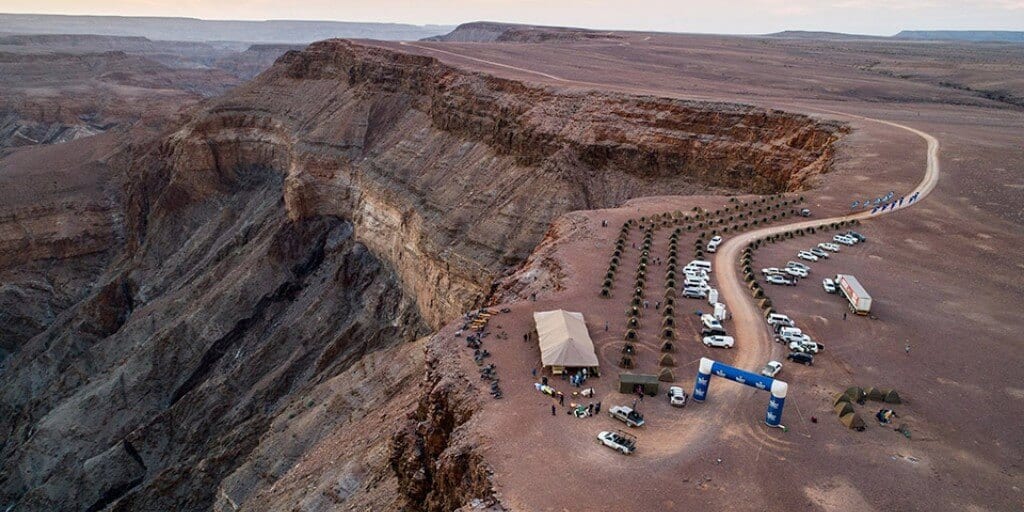 Visit the jaw-dropping 100km long, 26km wide Fish River Canyon in  the Ai-Ais/Richtersveld Transfrontier Park . It world’s second largest canyon after the Grand Canyon in the US, though with far less tourists visiting, as with all destinations in Namibia it’s both beautiful and serene. 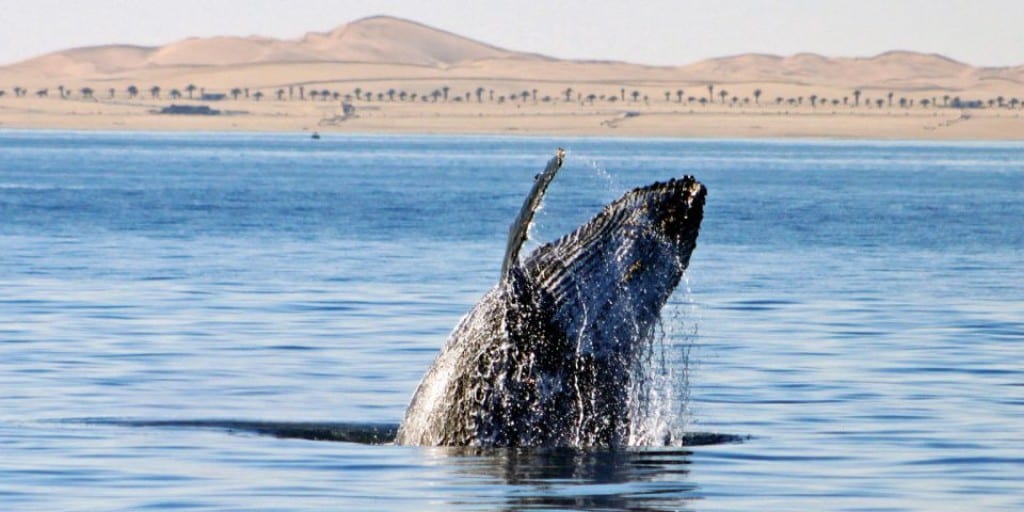 The cold waters off the Namibian coast harbor a wealth of marine life, no location more so than Walvis Bay. Styled as the ‘marine big five,, it’s possible to see whales, dolphn, sunfish, turtles and seals on a boat – or even canoe – safari.

Best time to go on safari in Namibia

As with the rest of Southern Africa, Namibia experiences summer between November and March and winter from May to August. From August temperatures keep rising until October when the first rains start to arrive in the northern areas, followed by large amounts of rain and occasional flash-flooding.

The best time to go on safari in Namibia depends on where you’re going, and what you’d like to see. October to March is the best time to visit Namibia’s coast around Walvis Bay and Sossusvlei as the climate provides a pleasant respite from the heated interior. If you’re travelling through the Skeleton Coast region the climate is similar year-round, with regular mist and winds.

For the inland areas of Namibia – including the Namib desert, Etosha and Kavango regions, the cooler months from April September provide temperatures far more bearable than summer months. Between May and September, thirsty animals gather at diminishing waterholes, making it the best time to go to Etosha for game viewing.

Search, track and book flights to Namibia, from anywhere in the world.

Search and book things to do in Namibia – tours, excursions and activities.

All national parks in Namibia are administered by the extremely efficient Namibia Wildlife Resorts.

Namibia is an enormous country, and one with large tracts given over to national parks. This gives Namibia the impressive status of being the country with the highest ratio of animals to humans in the world: In short, Namibia’s national parks are fantastic places to visit for safaris and wildlife watching.

A word of warning – the distances between national parks can be huge, and very few roads are tarmacked. A 2WD will serve most of the year in most parts of the country, but rainy season will see even 4WDs struggling in some areas on a driving safari in Namibia. 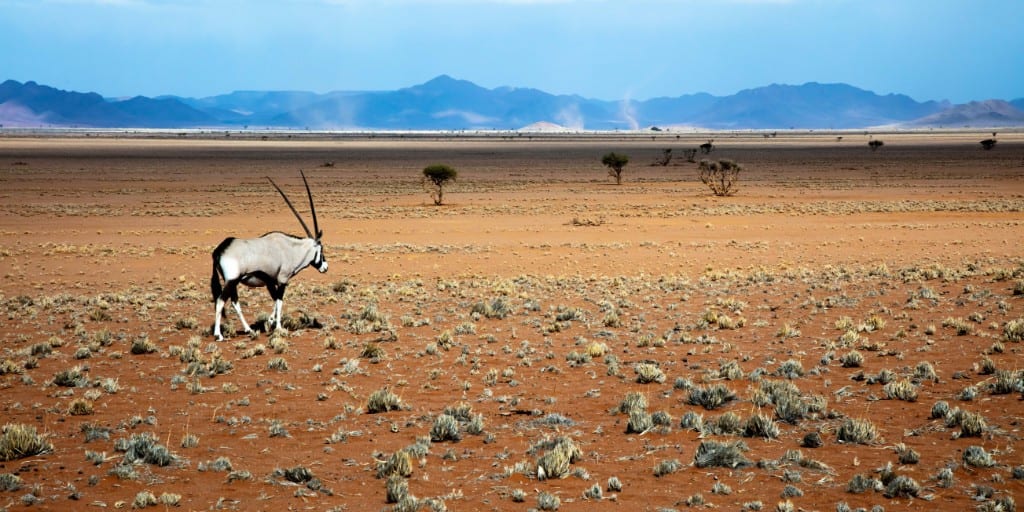 A classic African national park – with excellent visitor facilities – housing the ‘big five’ and much more in plains surrounding a huge central salt pan. Herds of elephants, black-maned lions and the world’s largest population of rare black rhinos gather at the 86 waterholes, springs and fountains found around the edges of the pan. 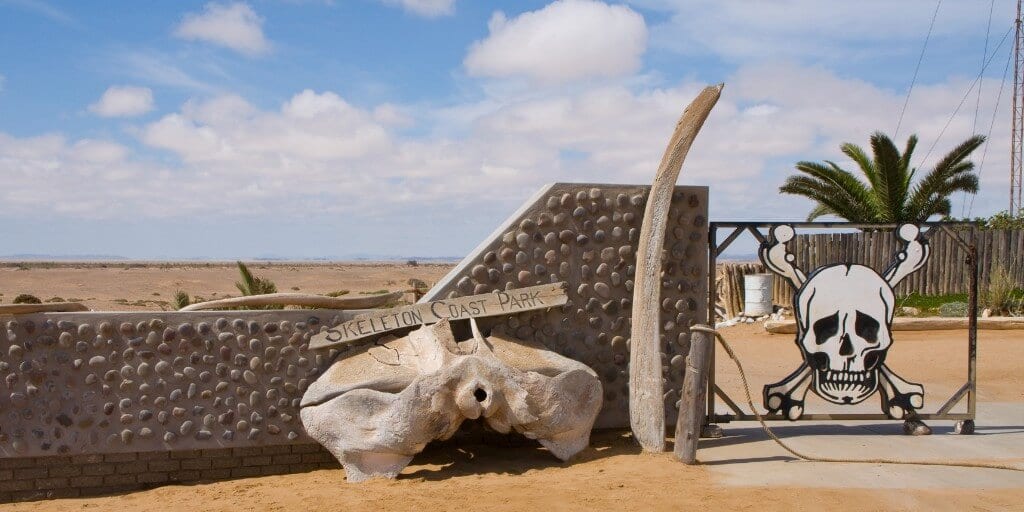 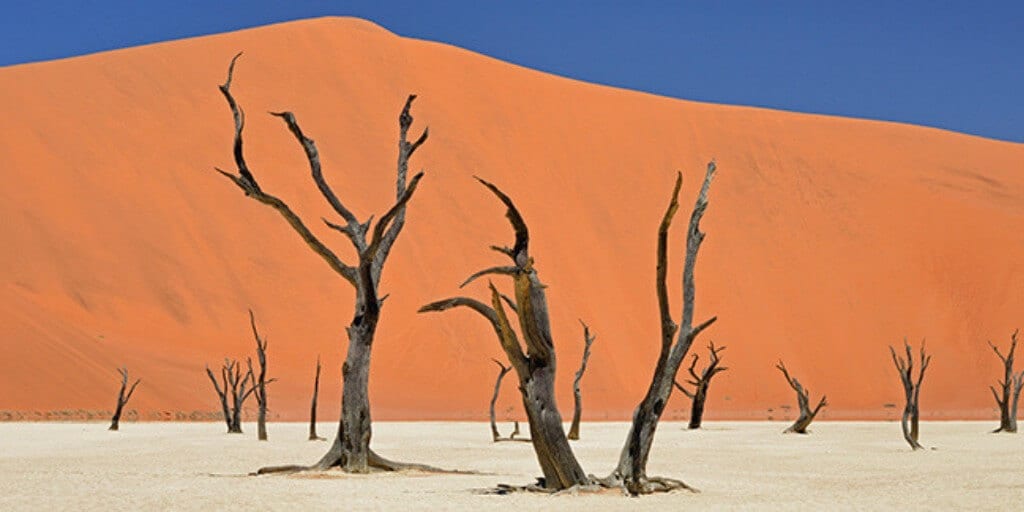 The oldest desert on earth, and quite possibly the most beautiful. Namib Naukluft National Park is easily accessible from Sossusvlei, where giant dunes tower 400m into the air, and pockets of long ago dried-out lakes serve as sporadic homes to forests of thousand year old dead trees. In a word, epic! 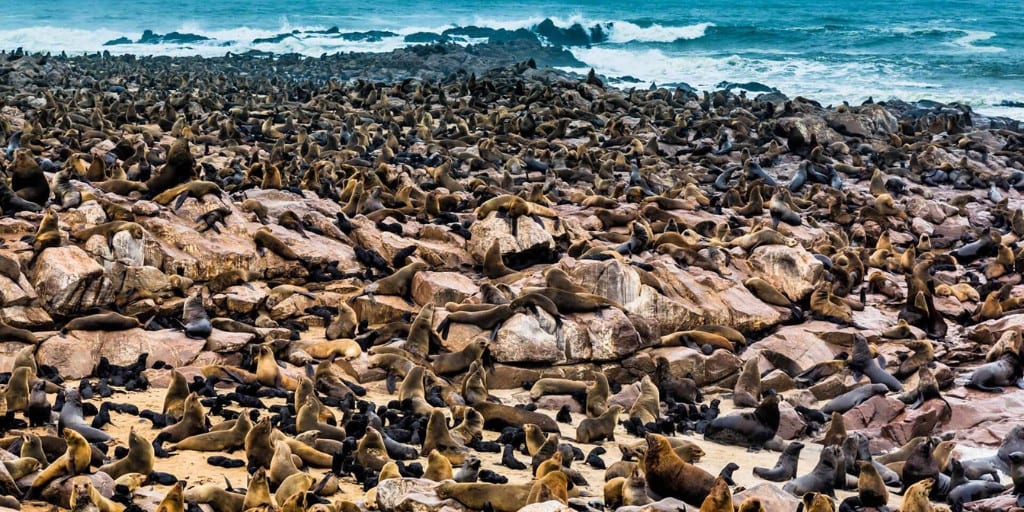 The reserve in central coastal Namibia is a sanctuary for the world’s largest breeding colony of Cape fur seals, where up to 200,000 seals come during the breeding season in November and December. It’s easily accessible on a day trip from Walvis Bay, and well worth the effort for a truly spectacular natural sight.

All national parks in Namibia

Use the map to locate all national parks in Namibia. Click the icons for more info.

Babwata National Park: Small national park in Caprivi Strip, unique in that it houses both a large animal and human population.

Cape Cross Seal Reserve: More seals breed at Cape Cross that anywhere else in the world, so if you like seals you’re in for a treat.

Khaudum National Park: Remote and wild national park hidden away in the Kavango Region is home to large elephant herds and packs of the endangered wild dogs. A visit here is not to be taken lightly.

Namib Naukluft National Park: Namibia’s largest park, and one of the world’s oldest and most intensely studied deserts.

Skeleton Coast National Park: Take a drive through one of the world’s most inhospitable spots, with alien landscapes and ancient shipwrecks adding atmosphere. Whilst self drive safaris are a definite option in Namibia – given most national parks in the country allow this – there are still a number of quality safari tour companies in Namibia that you may want to speak to before arrival in the country. With a fairly well developed regional and international inbound tourist market, Namibia has lots of wildlife activities and safaris on offer. These are supported and promoted by a broad range of  safari tour targeting budgets of all sizes and trips of all lengths – from half days trips from the capital Windhoek to two or four week driving expeditions.  Check out our reviews of safari tour companies in Namibia. 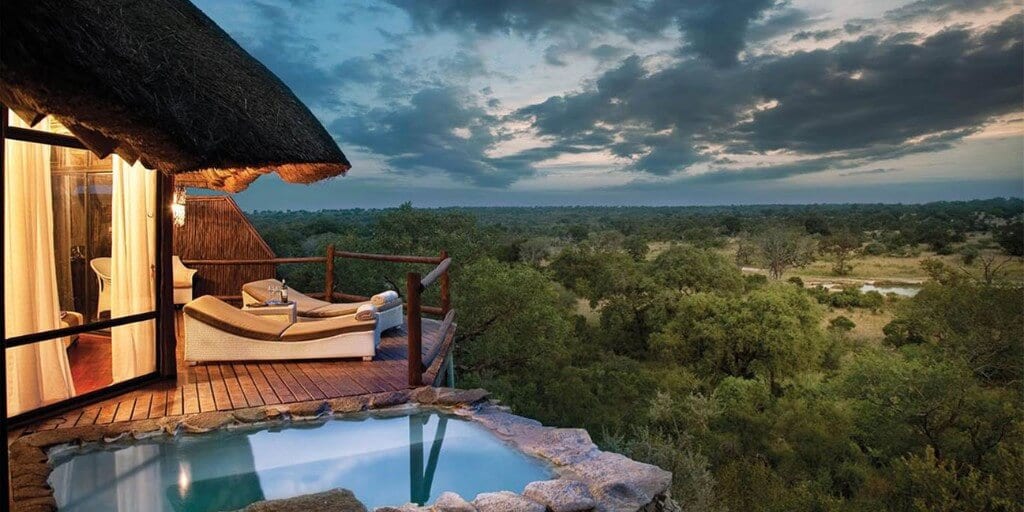 Much like it’s neighbour Botswana, Namibia doesn’t see huge tourist numbers and has a focus on either low-impact, high-end safaris, or self-drive safaris. Safari accommodation on offer in Namibia reflects this, with a broad range of  high-end safari lodges around the national parks, and excellent camping facilities for self-drivers attached to most safari lodges. If you want accommodation in a national park, this must be booked in person or by phone with Namibia Wildlife Resorts, who take care of all of Namibia’s national parks. Search and book accommodation in Namibia.

Do you have any experience of planning or going on safari in Namibia?